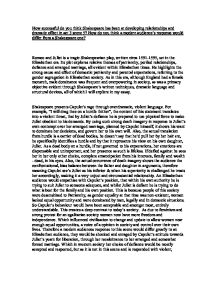 How successful do you think Shakespeare has been at developing relationships and dramatic effect in act 3 scene 5? How do you think a modern audiences response would differ from a Shakespeare one?

How successful do you think Shakespeare has been at developing relationships and dramatic effect in act 3 scene 5? How do you think a modern audience's response would differ from a Shakespeare one? Romeo and Juliet is a tragic Shakespearian play, written circa 1591-1595, set in the Elizabethan era. Its plot explores relative themes of patriarchy, periled relationships, defiance and arranged marriage, all evident within Elizabethan times. He highlights the strong cause and effect of domestic patriarchy and parental expectations, referring to the gender segregation in Elizabethan society. As in this era, although England had a female monarch, male dominance was frequent and overpowering in society, as was a primary objective evident through Shakespeare's written techniques, dramatic language and structural devices, all of which I will explore in my essay. Shakespeare presents Capulet's rage through overdramatic, violent language. For example, "I will drag thee on a hurdle thither", the content of this statement translates into a violent threat, that by Juliet's defiance he is prepared to use physical force to make Juliet obedient to his demands. By using such strong death imagery in response to Juliet's own contempt over her arranged marriage, planned by Capulet himself, it shows his want to dominate her decisions, and govern her to his own will. Also, the actual translation from hurdle is a carrier of dead bodies, he doesn't say that he'd pull her by her hair etc, he specifically identifies a hurdle and by that it represents his view on his own daughter, Juliet. ...read more.

Shakespeare has used structure by varying the length of speech in act 3 scene 5 to highlight status and dominance within the characters. For example, Once Capulet enters, at the climax length of his speech; his lines come from176 to 195, occupying the largest amount of lines in a single speech throughout the scene, compiled with other larges speeches throughout. This use of elongated speech evident in Capulet's character creates dominance over the script, and as he speaks the most by a large amount throughout the scene in contrast to the small allocated amounts of speech held by the female characters it draw backs to the idea of gender superiority. By verbally dominating the argument it establishes Capulet's authority as head of the house, and head of the conversation by having the most to say whilst overpowering in his eyes, his female inferiors. Relating to male superiority in Shakespearian society, as women were perceived to only speak once spoken too, and by Juliet defying that stereotype and answering back Capulet responds in an overpowering elongated speech. As his speeches progresses Juliet's input & defiance weakens and her character breaks down slowly into obedience. As at first she is polite but defiant in her will to decline the marriage, such as in the line 'proud can I never be of what I hate', but as Capulet's speeches progress she is subjected to pleading and begging for her fathers approval of her decision, for example in the line 'Good father, ...read more.

This works as a successful dramatic language technique as the knowledge of the audience in contrast to some central characters in the play is more developed, and so this creates tension between all areas of people situated there, the audience, the characters knowledgeable of Romeo's and Juliet's relationship, and those un-knowledgeable. This is because the audience's involvement is unlimited and so with their engagement, knowledge and sense of inevitability they are held onto what happens next, the tension between characters and gather their own conclusions and opinions to the future beyond the present scene, therefore creating this dramatic effect Shakespeare was able to entice the audience in to a fuller extent. Juliet's Relationship with her mother, Lady Capulet, affiliates with Juliet's and her Fathers, Capulet, in a sense of circumstantial function. In Act 3 Scene 5 Lady Capulet comforts Juliet, without the knowledge of the meaning of her dismay but once brushed aside and presents Juliet with her arranged marriage, speaking in empathising language, sweet talking her somewhat for her ulterior motive. For example before presenting the arranged marriage Lady Capulet offers her condolence and comforts Juliet, for example ' some grief shows much of love' this translates to basically saying, Juliet's grief shows she loved Tybalt greatly, so by Lady Capulet simulating compassion in her motherly role it shows a sensitive side, although this could be argued as her further request and declaration does involve Juliet's will, and so by somewhat sweet talking her it is furtherly ensuring Juliet's accordance to her arranged marriage. ...read more.