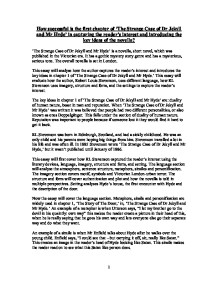 How successful is the first chapter of 'The Strange Case of Dr Jekyll and Mr Hyde' in capturing the reader's interest and introducing the key ideas of the novella?

The house is made seem dull by RL Stevenson describing it as a, "blind forehead of discoloured wall." Something being discoloured gives a dull impression. Also a "blind forehead" gives the house a scene of being dark. The first encounter the reader has with Hyde is early morning. Before Hyde is introduced it is described as a, "black winter morning." Having Enfield describe the morning like this, already gives the presence of evil in the setting, and makes the reader want to read on, to see if there is any evil. The door is described as being old, blank and left for ravages. It is described as being old and black 2when RL Stevenson says that the door is, "blistered and distained," and also that is has, "neither bell nor knocker." The door being left for ravages is described when RL Stevenson describes the door, "Tramps slouched into the recess and struck matches on the panels; children kept shop upon the steps; the schoolboy had tried his knife on the mouldings." Having the door described like this makes the reader think what does this door have to do with the story, and the reader read on to see what part in this story does the door play. Now this essay will describe the structure and form in chapter 1 of, 'The Strange Case of Dr Jekyll and Mr Hyde.' In chapter 1 of, 'The Strange Case of Dr Jekyll and Mr Hyde,' the account of when Hyde walks over the young child is told like a police ...read more.

They were both from a posh back ground but were both different. Clues such as foreshadowing are place around chapter 1 of, 'The Strange Case of Dr Jekyll and Mr Hyde,' to show that Hyde and Jekyll are the same person. The first clue comes when Enfield and Utterson are discussing the mysterious house and door that Hyde goes into. "Did you ever remark that door?" this is a clue as later on in the story you find out that it is the back door of Jekyll's home. The other clue is when Hyde comes out with the cheque with, "a name at least very well known and often printed," and as you find out last in the novella this was Jekyll's name on the cheque. This would make the reader want to read, to see how Hyde got this cheque with another mans name on it. This essay title was answered by first covering the literary devices used in chapter 1 of, 'The Strange Case of Dr Jekyll and Mr Hyde,' these literary devices were language, imagery, settings and structure and form. The second part of this essay covered the key ideas in introduced in chapter 1; the key ideas used were duality of human nature, reputation and beast in man. this is a great novella with a fantastic twist at the end, but the problem for the modern reader is that as this novella is so well known, they cannot read it as a mystery, as they already know Jekyll and Hyde are the same person. It is a mystery story that is no longer a mystery. ?? ?? ?? ?? 1 ...read more.