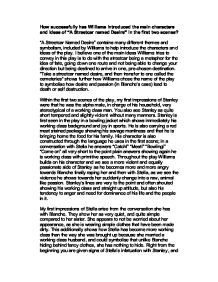 How successfully has Williams introduced the main characters and ideas of A Streetcar named Desire in the first two scenes?

How successfully has Williams introduced the main characters and ideas of "A Streetcar named Desire" in the first two scenes? "A Streetcar Named Desire" contains many different themes and symbolism, included by Williams to help introduce the characters and ideas of the play. I believe one of the main ideas Williams tries to convey in this play is to do with the streetcar being a metaphor for the idea of fate, going down one route and not being able to change your direction but being destined to arrive in one, pre-chosen destination. "Take a streetcar named desire, and then transfer to one called the cemeteries" shows further how Williams chose the name of the play to symbolise how desire and passion (in Blanche's case) lead to death or self destruction. Within the first two scenes of the play, my first impressions of Stanley were that he was the alpha male, in charge of his household, very stereotypical of a working class man. You also see Stanley as quite short tempered and slightly violent without many manners. Stanley is first seen in the play in a bowling jacket which shows immediately his working class background and joy in sports. He is also carrying a red meat stained package showing his savage manliness and that he is bringing home the food for his family. ...read more.

When Belle Reve was lost, as well as showing the loss of the old south it symbolises how Blanche becomes lost in the changing world. Blanche's trunk also has a big symbolic significance especially during the first part of the play. On two occasions Stanley tries to pry into Blanche's life and find out the truth behind her past and the loss of Belle Reve. To do this "he pulls open the wardrobe trunk standing in the middle of room and jerks out an armful of dresses" This shows symbolically how Blanche's life is contained completely in the trunk admitting to Stanley "Everything I own is in that trunk" When Stanley invades the trunk pulling out various items and disregarding them he is in fact invading her life stirring it up, destroying any order and showing no concern for anything's well being. The trunk gives the audience an insight into what is going to happen later in the play, how Stanley destroys the trunk symbolising Blanche and then later in the play destroys Blanche by r****g her. So Williams uses symbolism to foreshadow the r**e. Tennessee Williams involves many different themes throughout the play. Some of the more obvious themes include loss, fate, a changing south and the past. Even within the title the theme of fate is present referring to a street car. ...read more.

This also ties in with the theme of death. There are many deaths spoken of in the play, the old relatives as well as the death of the young boy of which Blanche blames herself. Mentioning these deaths is important to show Blanche's background and how she has become a broken and insecure character. I believe that within the first two scenes of "A Streetcar Named Desire" Tennessee Williams sets the characters up well for what happens later by showing us parts of their characters that do not seem important at the time but show great importance at a later stage. I believe examples of this are how we see Stella telling Blanche how "wild" she is about Stanley. This is then built on to show the complete desire she feels that will compel her to always go back to him. We also see Blanche being secretive, firstly about drinking but then later on Williams unveils Blanche's secret disgracing history. I also think that Tennessee Williams helps set up the characters endings using the Streetcar to symbolise Blanche's fate and Stanley destroying her trunk to give warning of the r**e. Ultimately I think that Williams sets out the basis of each character well leaving audiences with a whole rounded view of each character within the first two scenes that then gets explored with much more detail and explanation throughout the play. By Amy Smith MiDr ...read more.