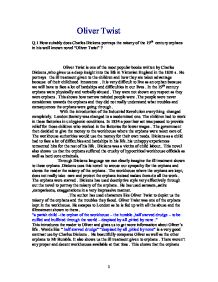 How suitably does Charles Dickens portrays the misery of the 19th century orphans in his well known novel &quot;Oliver Twist&quot; ?

Oliver Twist Q.1 How suitably does Charles Dickens portrays the misery of the 19th century orphans in his well known novel "Oliver Twist" ? Oliver Twist is one of the most popular books written by Charles Dickens ,who gives us a deep insight into the life in Victorian England in the 1830 s . He portrays the ill treatment given to the children and how they are taken advantage because of their childhood innocence . It is very difficult to live as an orphan because we will have to face a lot of hardships and difficulties in our lives . In the 19th century orphans were physically and verbally abused . They were not shown any respect as they were orphans . This shows how narrow minded people were .The people were never considerate towards the orphans and they did not really understand what troubles and consequences the orphans were going through . With the introduction of the Industrial Revolution everything changed completely. London Society was changed to a modernized one. The children had to work in these factories in unhygienic conditions. In 1834 a poor law act was passed to provide relief for those children who worked in the factories for lower wages . The government then decided to give the money to the workhouse where the orphans were taken care of. The workhouse authorities would use the money for their own needs. Dickens as a child had to face a lot of difficulties and hardships in his life .his unhappy experiences tormented him for the rest of his life . Dickens was a victim of child labour.. This novel also shows us that the orphans suffered the cruelty of hypocritical workhouse officials as well as hard core criminals. Through Dickens language we can clearly imagine the ill treatment shown to these orphans .Dickens uses this novel to arouse our sympathy for the orphans and shows the reader the misery of the orphans . ...read more.

This paragraph is about Fagin's den. The author has described Fagin's den.very effectively which depicts us the unhygienic conditions the orphans lived in . The orphans were persuaded to commit crime and they were taken advantage of their childhood .Even in the criminal world the conditions are as worse as in the workhouse . "a dirtier or more wretched place he had ever seen . The streets were narrow and muddy and the air was impregnated with filthy odours" This is atypical setting of the underworld. Phrases like"filthy odours," "streets were narrow and muddy" helps the reader to get a clear description of the underworld and we began to imagine how human beings can live in such unhygienic conditions and we began to feel sorry for the orphans. "The walls and the ceiling of the room were perfectly black with age and dirt"- This is a description about the Fagin's den . The environment was unpleasant and the conditions were extremely worse . "several rough beds made of old sacks , were huddled on the floor." .The orphans had no one to support them and in spite of that the society is ill treating them ,harassing them . Dicken also uses language to illustrate the habits of the orphans who were guided by the criminals such as Fagin - "Seated around the table were 4 to 5 boys , none older than Dodger , smoking long pipes , drinking spirits with the middle aged men" - This description is very effective portraying how badly the orphans are guided once left on the streets . The words "long" and "middle aged men"-are literary devices of exaggeration used by Dickens to emphasize on how miserable these orphans were. Dickens language is very effective and it shows us how the children were drawn up into the world of crime "crime like death is not confined to the old and the writhered one . ...read more.

alley and gutters are mine " the language used is very effective and arouses our sympathy not only for Nancy but for all the orphans. Orphans had their lives full of misery and never received any kindness " Lady ; cried the girl sinking on her knees, "dear, sweet, angel lady, you are the first that ever blessed me with such words as these and if I had heard them years ago they might have turned me form a life of sin and sorrow but it is too late too late." There is a contrast between Nancy and Rose . Rose was a young good and a beautiful lady who had home friends other admirers and everything to fill in. Rose was understanding because she had a proper bringing .The words "sin and sorrow" emphasizes on the misery faced by the orphans and we began to understand the feelings of the orphans. . The author , Charles Dickens gives me a vivid picture of the life of the orphans in the 19 th century . I don't agree with the unhygienic conditions in which the orphans are kept. The London Society does not show any compassion towards the orphans . From this novel I have understood that orphans in the 19 the century were treated as animals. The orphans are deprived of basic necessities . I have also noticed that the orphans are mentally very strong as they have the courage to withstand the sorrow. The 19th century orphans were treated differently from 21 st century orphans, who are not deprived of the basic necessities that is food and shelter . they are also shown respect, compassion and love. The orphanages in the 21 st century are properly maintained and orphans live in hygienic conditions.the language in Oliver Twist has beautifully portrayed the misery of orphans. I think Charles has done a successful in punching the message that we should understand their feelings and what troubles they are facing Done by: Amit Mukhi 1 ...read more.