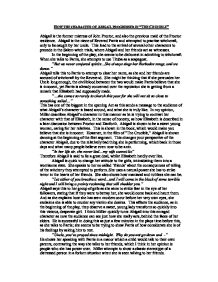 How the character of Abigail progressed in &quot;The Crucible&quot;.

HOW THE CHARACTER OF ABIGAIL PROGRESSED IN "THE CRUCIBLE" Abigail is the former mistress of John Proctor, and also the previous maid of the Proctor residence. Abigail is the niece of Revered Parris and attempted to practise witchcraft, only to be caught by her uncle. This lead to the arrival of several other characters to precede in the Salem witch trials, where Abigail and her friends act as witnesses. In the beginning of the play, she seems to be dishonest in admitting to witchcraft. When she talks to Parris, she attempts to use Tituba as a scapegoat. "But we never conjured spirits...She always sings her Barbados songs, and we dance." Abigail tells this to Parris to attempt to clear her name, as she and her friends are accused of witchcraft by the Reverend. She might be thinking that if she persuades her Uncle long enough, the civil blood between the two would make Parris believe that she is innocent, yet Parris is already concerned over the reputation she is getting from a remark that Elizabeth had supposedly made. "...she comes so rarely to church this year for she will not sit so close to something soiled..." This has one of the biggest in the opening Act as this sends a message to the audience of what Abigail's character is based around, and what she is truly like. ...read more.

It also appears that she tried to frame Elizabeth Proctor of witchcraft, by cleverly, yet deceivingly sticking a needle into her in the same position a needle was in Elizabeth's doll, acting as if Elizabeth's "poppet" was a voodoo doll. But this incident isn't seen, but only talked about by Cheever to Hale, Proctor and Elizabeth. "Like a struck beast...stuck two inches in the flesh of her belly, he draw a needle out." Abigail tries to become the victim here, by telling Reverend Parris that she is struck with a needle by the witchery of Elizabeth, and so they accuse Elizabeth of witchcraft. This affects the audience by showing that Abigail can be a guilt-free assassin, even eliminating people to get her desire. Miller probably did this to show she makes an impact, even when not in the scene. It would become apparent to the reader that Abigail has a gift of manipulating peoples minds and thoughts, twisting people around her finger, making them believe everything she says, even to the extent of making a court believe that Elizabeth is a witch. Miller writes Abigail to be mostly successful, but I think he made her like this to show off other characters with strong minds that do not fall for her lies. One such person is Proctor, who knows from experience that believing something that would be a lie that she says can bring destruction to your life. ...read more.

I think he tries to compare Abigail's character with that of Proctor. In the beginning of the play, she was seen as the young innocent girl, whilst Proctor may have been seen, in many people's eyes as an old pervert, but by the end of the play, readers thought of Proctor as a sort of mortar, as he died for the cause of trying to save his family from Abigail. Meanwhile, some may have been disgusted at Abigail's behaviour at thought that she in the end was the real 'bad guy.' Miller also shows largely during the first Three Acts how her real character thinks she can get away with saying and doing anything she wanted to. The way he shows how she reacts to different people shows her real character, especially how she uses her 'power' of being the reverends niece to her advantage. She reacts to people in her age group, or people she is intellectually superior to in a more intimidating manor, whilst when she talks to people she has no power over, she speaks with the up most care and politeness. Much in the way that products are released when a material goes through a crucible, Abigail went through her own personal "crucible" slightly changed, in the sense that she learnt a valuable lesson; She can't get everything she wants all the time. But other than that, she isn't very much changed because she is still greedy, selfish, deceiving, convincing and sly, but above all else, unhappy right the way throughout the play. ...read more.