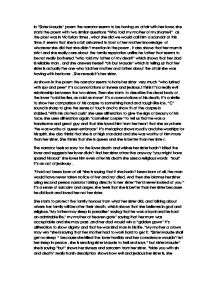 How the narrator is portrayed in Christina Rossetti's Sister Maude

In "Sister Maude" poem the narrator seems to be having an affair with her lover, she starts the poem with two similar questions "Who told my mother of my shame?" as the poet was in Victorian times , what she did we would call him a scandal at this time. it seems that she is a bit ashamed in front of her mother knowledge of whatever she did that she didn't mention in the poem , it also shows that her mum is strict and she really care about the family reputation unlike he father that seems to be not really bothered "who told my father of my dear?" which shows that her dad is reliable man , and she answers herself "oh but Maude" which is telling us that her sister is actually the one who told her mother and father about the affair she was having with her lover . ...read more.

again "comeliest corpse "to tell us that he was a handsome and great guy and that she loved him from her heart that she says here "he was worthy of queen embrace" it's metaphor shows royalty and she worships for his spirit, she also thinks that she is at high standard and she was worthy of him more than her sister. She thinks that she is queen and she is better than her sister. The narrator feels so sorry for the lover death and wishes her sister hadn't killed the lover and suggests her lover didn't find her sister attractive anyway "you might have spared his soul" she loves him even after his death she uses a religious words "soul" it's an act of jealousy . ...read more.

"My mother a crown may win "she is saying that her mother had to work hard to get it. "Sister Maude shall get no sleep " because she killed the lover horribly and her conscience wouldn't let her sleep in peace , she is sending sister Maude to h**l and says " but sister Maude" she is saying "but" shows her slyness and sarcasm from her sister. "bide you with sin and death" really harsh description shows how evil and jealous her sister is, she curses her sister telling that there will be a justice which is h**l and that she is different from any one in her family those will go heaven but she will stay at h**l. ...read more.