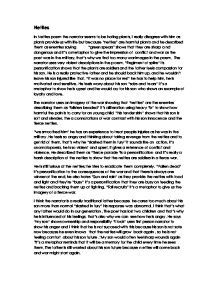 How the narrator is portrayed in &quot;Nettles&quot; by Vernon Scannell.

Nettles In Nettles poem the narrator seems to be hating plants, I really disagree with him as plants provide us with life but because "nettles" are harmful plants and he described them as enemies saying "green spears" shows that they are sharp and dangerous and it's a metaphor to give the impression of conflict and war as the poet was in the military, that's why we find too many war images in the poem. The narrator uses very violent descriptions in the poem. "Regiment of spike" its personification shows that the plants are soldiers and the father feels compassion for his son. He is a really protective father and he should back him up, and he wouldn't leave his son injured like that, "It was no place for rest" he has to help him, he is motivated and sensitive. ...read more.

"we smoothed him" he has an experience to treat people injuries as he was in the military .He feels so angry and thinking about taking revenge from the nettles and to get rid of them, that's why he "slashed them in fury" it sounds like an action, it's onomatopoeia, he is so violent and upset, it gives a reference of conflict and violence. He described them as "fierce parade "is a personification and it's really a harsh description of the nettles to show that the nettles are soldiers in a fierce war. He is still furious at the nettles; he tries to eradicate them completely. "Fallen dead" it's personification to the consequences of the war and that there is always one winner at the end, he also hates "Sun and rain" as they provide the ...read more.

I think that's what any father would do in our generation, The poet has lost two children and that's why he is influenced of his feelings, that's also why we can see how he is angry. He says "my son" shows ownership and responsibility "I took" uses first person narrator to show his anger and I think that he is not succeed with this because his son is not safe now because he even knows that the nettles will grow back again , so he is not feeling comfort about his son future ."My son would often feel sharp wounds again "it's a metaphor reminds that it will be a memory for the child every time he sees them. The father is still worried about his son future because nettles will come back and war might start again. ?? ?? ?? ?? ...read more.