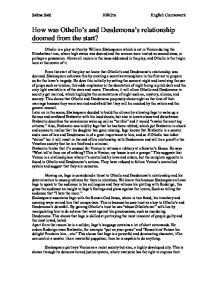 How was Othello(TM)s and Desdemona(TM)s relationship doomed from the start?

How was Othello's and Desdemona's relationship doomed from the start? Othello is a play written by William Shakespeare which is set in Venice during the Elizabethan time; where high status was desired and the women were treated as second class, or perhaps a possession. Above all racism is the issue addressed in the play, and Othello is the tragic hero at the centre of it. From the start of the play we know that Othello's and Desdemona's relationship was doomed. Shakespeare achieves this by creating a secretive atmosphere in the first act to prepare us for the lover's tragedy. He does this initially by setting the scene at night and involving the use of props such as torches, this adds emphasise to the denotation of night being is pitch dark and the only light available is of the stars and moon. Therefore, it will allow Othello and Desdemona to secretly get married, which highlights the connotations of night such as, mystery, silence, and secrecy. This shows that Othello and Desdemona purposely chose night as the time of their marriage because they were worried and afraid that they will be mocked by the nation and the general council. ...read more.

He is convinced that his daughter's actions were unnatural and she was spell bounded by him "That thou hast practised on her with foul charms." this statement shows that he is racist towards Othello, he thinks of Moors as practisers of witchcraft, which is ironic as to what Othello said in his speech in Act 1 Scene 3, "Her father loved me, oft invited me," this shows that Brabantio accepted Othello as a guest and a friend, but not as a son-in-law. He tries to convince the Duke that Othello has used witchcraft and stolen Desdemona to forcefully marry her, but his plan backfired; the duke and senators were very sympathetic towards Othello because they need him. Brabantio thinks that his daughter has committed "treason of the blood" by marrying Othello. He thinks of Othello as a devil from Iago's descriptions, "The devil will make a grandsire of you" which put Brabantio at unease and hate towards Othello. He clearly can't accept the fact that his "tender, fair and happy" daughter would love a man who she should "fear, not to delight." He has explained that a mixed race wedding would be "incur a general mock," because it wasn't acknowledged at the time the play was set. ...read more.

In conclusion, the real meaning of the play Othello is the battle between: love and hate, the black and white, and good and evil. The play addresses lots of issue concerning the mixed race couples in the Elizabethan period. Othello and Desdemona insecurities and jealousy lead to the death of both of them. Othello found it difficult to accept or question his claims regarding Desdemona's disloyalty. On the other hand, having Janus as you're advisor was a disadvantage to Othello. Also in the play, not everyone was against their wedding. The Duke and the senators were sympathetic to Othello. But, it could be argued that Othello was much of great importance to the Venetian army, since they were in war with the Turks. However, you could also argue that Othello has given a well balanced argument that was very convincing to the Council chamber which earned him more respect and acceptance. Also, Othello's and Desdemona's upheaval move from Venice to Cyprus intensely contributed to their downfall. Furthermore, I think Shakespeare wanted the lover's relationship to end in tragedy because if it didn't, the play wouldn't be approved by the Elizabethan parents, since their daughters might take Desdemona as an influence to get married on their own will. ?? ?? ?? ?? Salma Said 10RGm English Coursework ...read more.