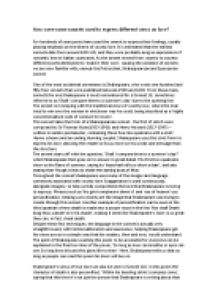 How were some sonnets used to express different views on love?

﻿How were some sonnets used to express different views on love? For hundreds of years poets have used the sonnet to express their feelings, usually placing emphasis on the theme of courtly love. It is estimated that the earliest sonnets date from around 1200 AD, and they were probably sung as expressions of romantic love in Italian courtyards. As the sonnet moved from country to country different poets attempted to ?make it their own?, causing the variation of sonnets we are now familiar with; namely the Petrarchan, Shakespearean and Spenserian sonnet. One of the most acclaimed sonneteers is Shakespeare, who wrote one hundred and fifty-four sonnets that were published between 1599 and 1609. From these many sonnets the one Shakespeare is most remembered for is Sonnet 18, sometimes referred to as ?Shall I compare thee to a summer?s day? due to the opening line. The sonnet is in keeping with the traditional views of courtly love, where the man tried to win over the woman in whichever way he could, being described as a ?highly conventionalised code of conduct for lovers?. ...read more.

In this case, the lines ?And yet, by heaven, I think my love as rare as any belied with false compare?, show us that Shakespeare sees no need in the exaggerated, false images of women the other sonneteers of the time were responsible for creating. In contrast, Lodge?s Sonnet 22, one of a long series of poems written to Phillis, is the perfect example of courtly love; it is possibly sonnets like this that Shakespeare was trying to reject with his Sonnet 130. Lodge uses many of the same metaphors that are used in Sonnet 130, and yet in an entirely different, albeit more traditional, way. The metaphors and imagery used in Sonnet 22, such as ?in thy cheeks sweet roses are embayed?, and ?gold more pure than gold doth gild thy hair?, are an obvious contrast to the lines ?I have seen roses demask?d red and white, but no such roses see I in her cheeks?, and ?If hairs be wires, black wires grow on her head,? from Shakespeare?s Sonnet 130. Sonnet 22 also shows us how exaggeration was used in these love poems. ...read more.

This collection of sonnets shows us how different sonneteers have used the strict form of the sonnet to express their feelings of love; whether it be through a simple love poem such as Shakespeare?s Sonnet 18 and 116 and Lodge?s Sonnet 22, a way of mocking false love as Shakespeare did in Sonnet 130, a warning to other men as in Spenser?s Sonnet XLVII or even as a way of expressing your grief at the loss of a loved one, as Longfellow did in The Cross of Snow. At the time these sonnets were written, the poems were very much expected to be used in courtship, so it would have been extremely surprising to see Shakespeare and Spenser using it differently, and even Longfellow to a certain extent. Despite these sonnets being from so long ago we can still relate to them; after all, are they really so different to the love songs we hear sung today? The language used in the sonnets, the metaphors, similes and imagery, along with the idea of courtly love itself have clearly stood the test of time, and are just as much a part of today?s society as society in the sixteenth century. ...read more.