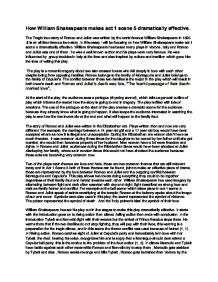 How William Shakespeare makes act 1 scene 5 dramatically effective. The Tragic love story of Romeo and Juliet was written by the world famous William Shakespeare in 1595 ,it is an all time famous love story .In this essay I will be focusing on how William Shakespeare make act 1 scene 5 dramatically effective. William Shakespeare has based many plays in Verona, Italy and Romeo and Juliet was one of them , he was a well known author and his plays were very famous .He was influenced by group troubles in Italy at the time and also inspired by culture and tradition which gave him the idea of writing this play. The play is a romantic tragedy about two star-crossed lovers who fall deeply in love with each other despite being from opposing families; Romeo belongs to the family of Montague's and Juliet belongs to the family of Capulet's. The conflict between these two families is the major in the play which will result in both lover's death and Romeo and Juliet's death was fate, "The fearful passage of their death-marked love", At the start of the play, the audience sees a prologue (rhyming sonnet), which tells us general outline of play which informs the reader how the story is going to end in tragedy. The play is filled with lots of emotions. The use of the prologue at the start of the play creates a dramatic scene for the audience, because they already know what is ...read more.

At the start of Act 1 scene 5, servants are clearing up the tables for the party. "Away with the joint-stools: remove the curt-cupboard: look to the plate. Good thou. Save me a piece of Marchpane and as thou loves me, let the porter let in Susan Grindstone and Nell". The servants in Capulet's ball are helping each other out by taking food and cleaning tables this show that the lower class as they are servants and helping out. In Elizabethan times a ball like this was one of the best ways to show how much of wealth they owned. Shakespeare's audience would have been expecting an extravagant party with music, dancing and so would of Capulet's guests, so Capulet is trying hard to get his party going and to make sure the party runs smoothly with no disruptions. One of the ways Shakespeare makes this scene dramatically effective is by using Capulet's speech at the ball "welcome gentlemen. I have seen the day that I have worn a visor and tell a whispering tale in fair lady's ears" he says it rather jokingly tells all to enjoy the night and dance to the music. This speech is important as it lets the audience know and that this night is a happy and joyous event. Capulet be happy when they are with their own people, this adds to the dramatic effectiveness of the scene because audience is now more aware of the great worry that is waiting to explode between the Capulet and Montague. ...read more.

When Romeo finally does kiss, Juliet says that she has received the sin that Romeo has washed out from himself and then Romeo amusingly replies "Sin from thy lips? O trespass sweetly urged! Give me my sin again." He says that because he must take back the sin and kisses Juliet for a second time. Shakespeare creates more effective drama by including both of them common sonnet to show an instant link and immediate love to each other, scripting the first words, followed then by a kiss, between Romeo and Juliet. Romeo first suggests that he is unworthy of Juliet's beauty and that to kiss would be a minor sin. By using loving conversation, Shakespeare is able to once again express the feelings of Romeo towards Juliet. Shakespeare added the kiss of Romeo and Juliet, to increase the drama and passion but also to represent a theme of love. In conclusion I now say that this scene is Dramatic in many ways by adding Capulet's speech, Romeo's speech and Tybalt speech which was full of hatred, I believe it's the most important scene of the play and it very dramatic and engages the audience by showing deeply passionate love of Romeo towards Juliet and in this scene that's when two lovers meet and fall in love. Shakespeare used two key themes in this scene which are love and hate and these themes are still relevant today because people fall in love everyday, there are still families who dislike and argue over each other, this becomes a conflict between families. ?? ?? ?? ?? ...read more.