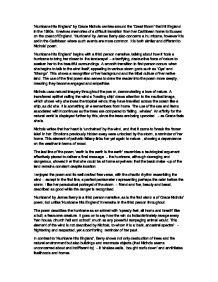 'Hurricane hits England' by Grace Nichols centres around the 'Great Storm' that hit England in the 1980s. It revives memories of a difficult transition from her Caribbean home to Sussex on the coast of England. 'Hurricane' by James Berry also concerns a hurricane, however it is set in the Caribbean where such events are more common. It is both similar and different to Nichols' poem. 'Hurricane hits England' begins with a third person narrative, talking about how it 'took a hurricane to bring her closer to the landscape' - a terrifying, destructive force of nature to awaken her to the beautiful surroundings. A smooth transition to first person occurs when she begins to talk to the wind itself, appealing to various storm gods such as 'Oya' and 'Shango'. This shows a recognition of her background and the tribal culture of her native land. ...read more.

This element of pathetic fallacy links her yet again to nature, showing a dependence on the weather in terms of mood. The last line of the poem, 'earth is the earth is the earth' resembles a tautological argument effectively placed to deliver a final message - the hurricane, although damaging and dangerous, showed her that she could be at home anywhere; that the basic make-up of the land remains constant despite location. I enjoyed the poem and its well crafted free verse, with the chaotic rhythm resembling the wind - except in the first line, a perfect pentameter representing perhaps the calm before the storm. I like her paradoxical portrayal of the storm - friend and foe, beauty and beast, described as good while the danger is recognised. 'Hurricane' by James Berry is a third person narrative, as is the first stanza of Grace Nichols' poem, but unlike 'Hurricane hits England' it remains in the third person throughout. ...read more.

The destruction of forest is also present in England. The word 'pounded' endows the tropical storm with the very human ability to use hands to tear and beat things, personifying it. They both relate to the Caribbean. Imagery such as 'zinc sheets are kites' in 'Hurricane' allows the reader to visualise the state of a place after the storm. The fact that the metal sheets are 'kites', thin sheets of paper, shows the strength and power of the wind, to make zinc seem flimsy. It also makes the wind seem almost playful - it is mostly children who fly kites. Berry shows that in a storm, all are equal - 'goats, dogs, pigs, all are human together'. This means all suffer equally when nature wreaks havoc, because it does not differentiate. This is different to the feel in 'Hurricane hits England', which focuses mostly on the effect on the author. I enjoyed both poems, but preferred Nichols' flowing lines to James Berry's style, despite his excellent use of metaphor. ...read more.