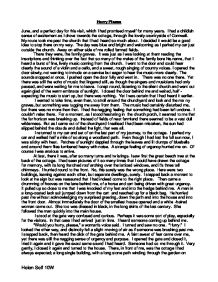 Hurry Please June, and a perfect day for this visit, which I had promised myself for many years. I had a childish sense of excitement as I drove towards the cottage, through the lovely countryside of Cornwall. My route took me past the church that I had heard so much about. I decided it would be a good idea to stop there on my way. The day was blue and bright and welcoming as I parked my car just outside the church. Away on either side of me rolled farmed fields. There they were, the family graves. It was just as I was looking at them reading the inscriptions and thinking over the fact that so many of the males of the family bore his name, that I heard a burst of fine, lively music coming from the church. I went to the door and could hear clearly the sound of a violin and a cello, and a sweet, rough singing of country voices. I opened the door slowly, not wanting to intrude on a service but eager to hear the music more clearly. The sounds stopped at once. I pushed open the door fully and went in. There was no one there. Yet there was still the echo of music that lingered still, as though the singers and musicians had only paused, and were waiting for me to leave. I crept round, listening to the silent church and went out again glad of the warm embrace of sunlight. I closed the door behind me and waited, half-expecting the music to start up, but there was nothing. Yet I was certain that I had heard it earlier. ...read more.

"Would you hurry, please," and knew that they were being spoken to me. But the room was empty, the only sound was the birdsong in the garden outside. I called out. "Who's there?" The house was silent. And now at the same time, it was full of movement, of panic even. I ran to the porch, shouting, "Didn't you see someone then, a woman did you let her in?" The porch was empty. I was just at the point of walking out the front door and into the garden when I heard the sound of a woman crying out in pain from one of the upstairs rooms. The sound echoed round the house, rolling from room to room. Frightened though I was, it was my instinct to turn back to the porch and run right through the parlour and up the stairs. I went straight into the main bedroom of the house. This, I was sure, was where the cry had come from. There was not a soul to be seen there. I was about to go to through to the further room when I heard a sharp intake of breath, a gasp here, a sigh from the other side - all around me, it seemed unseen people were breathing. Then the sounds quietened down. I steadied myself, and made myself take the time to look around me. The room was light, having windows at each side, but cool because of the low thatch which kept most of the sunlight out. The floorboards were of fine old chestnut, and a large bed took up most of the room. There was certainly nobody in the room. ...read more.

She had heard the sound from somewhere in her imagination, I think. Slowly she put down the bag and reached over to where the baby was bundled up in its shawl. With one hand to her mouth she moved away a corner of the sheet. The baby's fist unclenched. "Dead!" she cried. "Stop an minute! He's alive enough, sure!" I leaned back against the wall, faint with exhaustion. The voices drizzled around me, too fragmented now to catch. I saw the doctor and the nurse attending to the child, heard it first strong cry, saw him being lifted into the air and put into the young mother's arms. "Rupert," her husband said. "Young Rupert Grant is born." In the way that the moving shapes cast by firelight around a room and then extinguished, so the figures in the room dissolved. A great peace descended on the house, and on me. I believe I went into a kind of deep sleep there, standing as I was. Certainly I was startled into wakefulness by the sound of a sudden burst of laughter coming from outside. I looked out of the window, into the dazzle of the sun, and saw that the garden was full of people, visitors, like myself, taking photographs, crouching to smell the flowers. Soon the house would be invaded by them. Already now I could hear voices in the room below me. I went through the narrow doorway and heard footsteps behind me. "Just a moment," a young woman said. I knew her voice. I turned, and she came softly towards me, holding out a book. "I think you dropped this." I took it from her. "The Modigliani Scandal," I said. "I would hate to loose this. Thank you." "Not at all," she said, and turned to go away. "Thank you." Helen Self 10W ...read more.