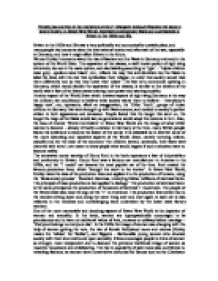 Huxley had one foot in the nineteenth century (Margaret Atwood) Examine the ways in which Huxley, in Brave New World, expresses contemporary fears and uncertainties in Britain in the 1920s and 30s.

'Huxley had one foot in the nineteenth century' (Margaret Atwood) Examine the ways in which Huxley, in Brave New World, expresses contemporary fears and uncertainties in Britain in the 1920s and 30s. Britain in the 1920s and 30s was a very politically and economically unstable place, and many people had concerns about the international tension and aftermath of the war, especially in Germany, and how it might affect Britain in the future. We see Huxley's concerns about the rise of fascism and the Nazis in Germany mirrored in the system of the World State. The separation of the classes, a well known policy of right wing extremists, we see in the caste system, and also labeling according to 'type' - 'Alpha children wear grey...epsilons wear black', etc., reflects the way that anti-Semitism led the Nazis to label the Jews with the star that symbolizes their religion, in order that society would treat them differently and so that they knew their 'place'. The fear of a communist uprising in Germany, which would abolish the separation of the classes, is similar to the citizens of the world state's fear of the lower castes craving more power and wanting equality. ...read more.

'Standard Gammas, unvarying Deltas. Millions of identical twins. The principal of mass production at last applied to biology.' The production of identical twins is the same principal as the production of thousands of identical T model cars. The people of the World State also hold the sign of the 'T' in reverence. The production lines which led to the workers sitting down and doing the same thing over and over again to each car is also reflected in the mindless and unchallenging work undertaken by the lower caste factory workers. One of the most memorable and shocking aspects of Brave New World is the depiction of women and sexuality. In the book, women are hypnopaedically encouraged to be promiscuous and to have no traditional values of love, romance or celibacy before marriage - 'Everyone belongs to everyone else'. In the 1920s the image of women was changing with the help of women getting the vote, the rise of female Hollywood icons and cinema (Huxley makes the 'talkies' the 'feelies'), and flappers - fashionable young women who shocked society with their short skirts and open sexuality. ...read more.

Industrialism was also an issue in the 20s, and mass marketing helped to provide ordinary families with luxury goods like radios and refrigerators. Huxley emphasizes this to include every part of a citizen's life being for the purpose of fuelling the economy - for example, conditioning children cruelly by administering electric shocks. '"We condition the masses to hate the country,' concluded the Director, "But simultaneously we condition them to love all country sports. At the same time, we see to it that all country sports shall entail the use of elaborate apparatus. So that they consume manufactured articles as well as transport. Hence those electric shocks."' Leisurely activities such as golf and tennis and squash have been changed, as the previous versions did nothing to help the economy - golf has become 'obstacle golf', tennis 'Riemann surface tennis', and squash 'escalator squash'. To express contemporary fears of the 1920s and 30s, Huxley has taken many of them and made them reality, most notably the dictatorship of the World State. He emphasized them, sometimes to a comic level, sometimes to a disturbing one, to symbolize some of the dangers and uncertainties Britain faced at the time. ...read more.