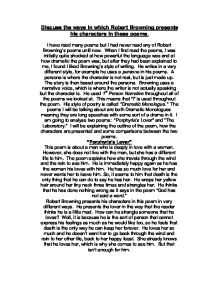 I am going to analyse two poems: &quot;Porphyria's Lover&quot; and &quot;The Laboratory.&quot; I will be explaining the outline of the poem, how the characters are presented and some comparisons between the two poems.

Discuss the ways in which Robert Browning presents his characters in these poems. I have read many poems but I had never read any of Robert Browning's poems until now. When I first read the poems, I was initially quite shocked at how powerful the language was and at how dramatic the poem was, but after they had been explained to me, I found I liked Browning's style of writing. He writes in a very different style, for example he uses a persona in his poems. A persona is where the character is not real, but is just made up. The story is then based around the persona. Browning uses a narrative voice, which is where the writer is not actually speaking but the character is. He used 1st Person Narrative throughout all of the poems we looked at. This means that "I" is used throughout the poem. His style of poetry is called "Dramatic Monologue." ...read more.

He presents the lover in the way that the reader thinks he is a little mad. How can he strangle someone that he loves? Well, it is because he is the sort of person that cannot express his feelings as much as he would like too, so he feels that death is the only way he can keep her forever. He loves her so much and he doesn't want her to go back through the wind and rain to her other life, back to her happy feast. She already knows that he loves her, which is why she comes to see him. But that isn't enough for him. The Lover's Character reveals aspects that he doesn't intend to reveal about himself. I say this because I came to the conclusion that he was mad and didn't really understand him or what he was doing. He was presented to me like this when I read the poem. It is also a little how the other character was presented. ...read more.

She has the poison locked in a tiny signet ring. She planned to pour it in her drink when she went back to where they were. She couldn't wait to kill her, she thought her plan was marvellous. She thought she could have the man she wanted. My second comparison between these two poems is that both characters are very sick minded. How can they think that if they kill a person who causes any competition that they will have a chance with the one they love? They are both murderers, but they do not realise what they are doing. It is almost like a game for them and is trying to win one over. In conclusion, I would say that Robert Browning's characters are presented in a similar way. His poems are said to be "Dramatic Monologues" and I can agree with this term. His poems are very powerful and they leave an impression on you. The main message that I have learnt from the two poems is that love can cause death, especially when there is too much craving. ...read more.