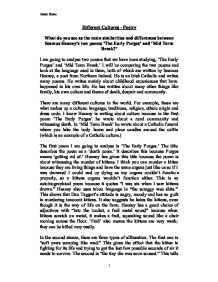 I am going to analyse two poems that we have been studying, 'The Early Purges' and 'Mid Term Break.' I will be comparing the two poems and look at the language used in them, both of which are written by Seamus Heaney

Different Cultures - Poetry What do you see as the main similarities and differences between Seamus Heaney's two poems 'The Early Purges' and 'Mid Term Break?' I am going to analyse two poems that we have been studying, 'The Early Purges' and 'Mid Term Break.' I will be comparing the two poems and look at the language used in them, both of which are written by Seamus Heaney, a poet from Northern Ireland. He is an Irish Catholic and writes many poems. He writes mainly about childhood experiences that have happened in his own life. He has written about many other things like family, his own culture and theme of death, despair and community. There are many different cultures in the world. For example, these are what makes up a culture: language, traditions, religion, ethnic origin and dress code. I know Heaney is writing about culture because in the first poem 'The Early Purges' he wrote about a rural community and witnessing death. In 'Mid Term Break' he wrote about a Catholic funeral where you take the body home and place candles around the coffin (which is an example of a Catholic culture.) The first poem I am going to analyse is 'The Early Purges.' ...read more.

The second poem I am analysing is 'Mid Term Break.' The content of the poem is about the death of the poets younger brother who was taken tragically in a car accident. The poem also talks about his brothers funeral and how his family are trying to make it better. There are four meanings to the title of 'Mid Term Break.' One is that Heaney is getting a break from school for his brothers funeral. Another is the breaking of his younger brothers body when the car hits. Also, it is being heartbroken because his brother is dead. Finally, it is about the breaking of innocence when Heaney finds out about life and death as it is his first grown up experience, a funeral. Like 'The Early Purges,' the reader learns in stanza one that the poem is in autobiographical style. We learn this because the first line says "I sat all morning in the college sick bay." Heaney also uses the first stanza to mention religion with "counting bells knelling to a close." The bells suggest a religious purpose or service, like a funeral or wedding. At the end of this line is alliteration, "classes drawn to a close," as this slows the line down. ...read more.

Jews have their Bah Mitzvah when they are changing from boy to man. In conclusion, there are lots of similarities and differences between 'The Early Purges' and 'Mid Term Break.' The similarities are that both poems deal with the theme of death and coming to terms with the deaths. Both poems are also clearly written autobiographical as Heaney writes in the first stanzas "I was" and "I sat." The two poems are based on childhood memories and experiences, but two different kinds of them. Again, both poems deal with the responsibilities of becoming a man. In 'The Early Purges' Heaney learns to kill animals as it is a job needed to do. In 'Mid Term Break' Heaney breaks to his manhood by attending his brothers funeral. Finally, both poems deal with the loss of a child's innocence. The differences are the types of death and the time scale. In 'The Early Purges' at the end of the poem, Heaney has been bruised and scarred for life as a child so he becomes well known to death but in 'Mid Term Break' Heaney is still shocked by what has happened. The second difference is the time scale. In 'The Early Purges' it carries on from a child up until Heaney is an adult whereas 'Mid Term Breaks' time scale is just focused on one day and that is the funeral. ?? ?? ?? ?? Adam Binns ...read more.