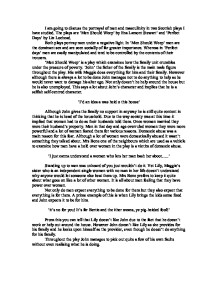 I am going to discuss the portrayal of men and masculinity in two Scottish plays I have studied. The plays are 'Men Should Weep' by Ena Lamont Stewart' and 'Perfect Days' by Liz Lochead.

I am going to discuss the portrayal of men and masculinity in two Scottish plays I have studied. The plays are 'Men Should Weep' by Ena Lamont Stewart' and 'Perfect Days' by Liz Lochead. Both plays portray men under a negative light. In 'Men Should Weep' men are the dominant sex and are seen socially of far greater importance. Whereas in 'Perfect days' men are easily manipulated and tend to be controlled by the contents of their trousers. 'Men Should Weep' is a play which examines how the family unit crumbles under the pressure of poverty. 'John' the father of the family is the main male figure throughout the play. His wife Maggie does everything for him and their family. However although there is always a lot to be done John manages not to do anything to help as he would never want to damage his alter ego. Not only doesn't he help around the house but he is also unemployed. This says a lot about John's character and implies that he is a selfish self-centred character. 'I'd an idea a was heid o this hoose' Although John gives the family no support in anyway he is still quite content in thinking that he is head of the household. ...read more.

Throughout the play John manages to pick out quite a few of his own faults without even realising what he is doing. 'a mans nae right to bring weans intae the world if he canne provide for them' Nonetheless this is exactly what he has done, he has six children, no form of income and he has no notion in helping around the house. As the play progresses the reader begins to realise that the men are a far weaker and stupider sex than the women, also that the women are far stronger and intelligent. 'They canna stawn up tae things like a women, they loose their heids and start shouting' Men are portrayed to have little control over themselves and their actions. Unlike the women who are far more in control with themselves. When John has a conflict with his daughter this is displayed. Throughout the majority of the play men are seen to have a large control over women but as the play develops Maggie's journey from oppressed housewife to self-empowered women displays the power shift between the two. ...read more.

Brendan is an extremely 'feminine' character, he is used to show that male and females can have successful relationships. When Barbs attempts to have a baby are unsuccessful she turns to Brendan who happily agrees to try and have a baby with her. But whilst they are doing that Barb also has her 'toyboy' Grant on the side. Who doesn't know about Brendan and who Brendan doesn't know about. Grant is seen to give Barbs a lot of happiness but their relationship ends with Grant asking. 'Why are you so ashamed of me?' This portrays Grant as a very na�ve character as Barbs was only using him for a bit of fun the relationship as never serious, yet he looked upon it to be. In conclusion the portrayal of men and masculinity in two Scottish plays that I have studied are that they completely dominate the society. They are selfish self-absorbed characters. In "Men Should Weep" this is portrayed through John a very self-absorbed character. I think the writer's purpose was to show how bad the conditions were that people use to live in and some people still do. In "Perfect Days" the men are portrayed to be very stupid and weak characters. I feel that the writer's purpose was to show that women can cope without men. ...read more.