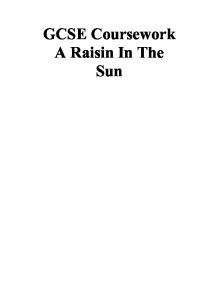 I am going to write about how Walter undergoes a transformation in the play &quot;A Raisin In The Sun&quot; of the final act of the play. First of all I will be writing about Walter's stage directions and how they show Walter's behaviour an his feelings

GCSE Coursework A Raisin In The Sun In the final act of the play Walter undergoes a transformation. How is this presented by Lorraine Hansberry? In this essay I am going to write about how Walter undergoes a transformation in the play "A Raisin In The Sun" of the final act of the play. First of all I will be writing about Walter's stage directions and how they show Walter's behaviour an his feelings. I will also be writing about Walter's use of language because I want to show how Walter changes his language whatever mood he is in. After I have done that I will be writing about the audience feelings towards Walter at the start of the act and the end of the act. I will be giving ideas and themes explored in this extract and I will also be giving my opinions about Walter. Finally I would be writing about Black experiences in the 1950s. Walter Lee Younger is the major character in A Raisin In The Sun because the character, Walter Lee Younger has an important role in the play when he loses nearly all the money the family come into and when he is obsessed with his dreams. Walter Lee Younger lives with his Mama, his wife Ruth, his son Travis and his sister Beneatha. ...read more.

At this point of the play money seems to be the most important thing to him. When Mr Lindner first arrives, Lorraine Hansberry uses the staging to show that the moment Mr Lindner arrives he tries to gain attention from the family, that he is here and ready to accept he proposal he made to the family. But the family is in a horrible, upsetting mood and get even more angry and upset when they see Mr Lindner. For example one stage direction is, "Walter has began the trek out of the room, slowly and awkwardly, rather like a small boy, passing the back of his sleeves across his mouth from time to time". This shows that Walter feels very awkward towards Mr Lindner and his family because deep inside him he knows whatever his doing is wrong but doesn't want to admit it and he realises his family going to be watching him doing the biggest mistake of his life. It also shows that Walter doesn't really know how to go up to Mr Lindner and say I want your money if you want my house. However, later in the act Walter becomes more emotional and questions to himself if he is doing the right or wrong. The stage directions that show this are, "Looks down into his boy's eyes", "He breaks down completely" and "Starting to cry and facing the man eye to eye". ...read more.

audience that Walter is an emotional man who finally takes the right decisions and finally shows that Mama has realised that her son, Walter has become a man and is very proud with him. At the time that the play was first produced, it would have made the audience think about how this thing with Walter and his family happened with them. Lorraine Hansberry trying to say about Black experiences in the 1950s that Black people had a very tough life and were discriminated against by white people. Also that no matter how Black people are treated unfairly and badly they will always stick together and this includes with family as well. In my opinion about Walter is that Walter is an emotional man and has good qualities in him, but never really shows these feelings. I also think that he is the type of person that get obsessed quickly and he is the type of person who will do anything or say anything jus to get what they want. My opinion about the play, "A Raisin In The Sun" is that the play is an interesting play, the play shows us the audience how life was for Black people in the 1950s and the play gives us many messages. For instance always help your family and accept their decisions and never lose your self-respect in front of others. ...read more.