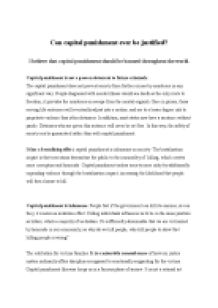 I believe that capital punishment should be banned throughout the world.

Transfer-Encoding: chunked ﻿Can capital punishment ever be justified? I believe that capital punishment should be banned throughout the world. Capital punishment is not a proven deterrent to future criminals. The capital punishment does not prevent society from further crimes by murderers in any significant way. People diagnosed with mental illness would see death as the only route to freedom, it provides the murderers an escape from the mental anguish. Once in prison, those serving life sentences will eventually adjust into a routine, and are to a lesser degree risk to perpetrate violence than other detainees. In addition, most states now have a sentence without parole. ...read more.

Capital punishment is inhumane. People feel if the government can kill its enemies, so can they, it creates an imitation effect. Killing individuals influences us to be in the same position as killers, which a majority of us disdain. It's sufficiently abominable that we are victimized by homicide in our community; so why do we kill people, who kill people to show that killing people is wrong? The retribution for victims families. It is a miserable remembrance of how our justice system ordinarily offers discipline as opposed to emotionally supporting for the victims. Capital punishment likewise keeps us in a furious phase of sorrow. ...read more.

Capital punishment method is more expensive than life in prison, the money saved from executions could go to families of the victim, and it is more logic to spend tax money on other needs such as health care and education, one major reason due to the huge cost is the attorney pay, the lawyer's salary are high, therefore using more time on a case leads to more expenses. Capital punishment does not deter homicide, it is a cruel and cold blooded form of punishment. There have been cases where innocent individuals were sentenced to death and later observed to be innocent. It is my judgment that the capital punishment is a bad policy, it has no place in the modern world and everyone should oppose this and advocate its abolition once and for all! ...read more.