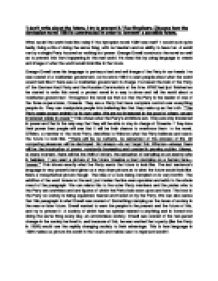 I dont write about the future, I try to prevent it. Ray Bradbury. Discuss how the dystopian novel 1984 is constructed in order to prevent a possible future.

'I don't write about the future, I try to prevent it.' Ray Bradbury. Discuss how the dystopian novel 1984 is constructed in order to 'prevent' a possible future. What would the world look like today if the dystopian novel 1984 was real? It would suck quite badly, living a life of doing the same thing, with no freedom and no ability to have fun. A world run by a single Party focused on nothing but power. George Orwell constructs the novel so well as to prevent this from happening in the real world. He does this by using language to create and image of what the world would look like in the future. ...read more.

'"The Party seeks power entirely for its own sake. We are not interested in the good of others; we are interested solely in power."' This shows what the Party's ambitions are. They are only interested in power and that is the only way that they will be able to stay in charge of Oceania. If they lose their power then people will see that it will be their chance to overthrow them. In the novel, O'Brien, a member of the Inner Party, describes to Winston what the Party believes and wants the future to look like. '"There will be no curiosity, no enjoyment of the process of life. All competing pleasures will be destroyed. ...read more.

The boot is the Party so society is being squashed, beaten and hated on by the Party. We can also sense that this paragraph is what Orwell was scared of. Something stamping on the faces of society in the near or later future. Orwell wanted to warn the people in the present and the future of this, and try to prevent it. A society of which has no opinion related to anything and is forced into doing the same thing every day, an emotionless society. Orwell was scared of the fast-paced change in the society he lived in, and because of this, he was worried that a party (like the Party in 1984) would use the rapidly changing society to their advantage. This is how language in 1984 makes us picture the world in the future and makes want to repel and avoid it. ...read more.