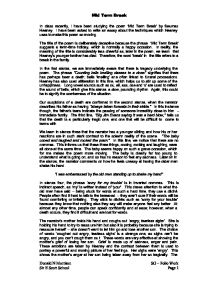 I have been studying the poem 'Mid Term Break' by Seumas Heaney. I have been asked to write an essay about the techniques which Heaney uses to make this poem so moving.

In class recently, I have been studying the poem 'Mid Term Break' by Seumas Heaney. I have been asked to write an essay about the techniques which Heaney uses to make this poem so moving. The title of the poem is deliberately deceptive because the phrase 'Mid Term Break' suggests a term-time holiday, which is normally a happy occasion. In reality, the meaning of the title is considerably less cheerful as, later in the poem, we learn that Heaney's younger brother has died. Therefore, the word 'break' in the title refers to a break in the family. In the first stanza, we are immediately aware that there is tragedy underlying the poem. The phrase "Counting bells knelling classes to a close" signifies that there has perhaps been a death; bells 'knelling' are often linked to funeral processions. Heaney has also used alliteration in this line, which helps us to stir up some of the unhappiness. Long vowel sounds such as ou, ell, ass, ose and 's' are used to reflect the sound of bells, which give this stanza a slow, pounding rhythm. Again, this could be to signify the somberness of the situation. Our suspicions of a death are confirmed in the second stanza, when the narrator describes his father as having "always taken funerals in their stride." ...read more.

She is holding his hand to try to reassure him but also it is probably because she is trying to reassure herself - she doesn't want to let him go and lose another son. The choice of words 'coughed out angry, tearless sighs' is a strange one, as sighs can't be angry, and you can't cough them out. These words are very effective at showing the mother's grief of losing her son. Grief is made up of sadness, anger and pain. These emotions are taken by Heaney and the contrast between them is used to portray a powerful and moving picture of her feelings. Her sighs were 'angry'. This shows the mother's anger at her son being taken away from her so tragically. The choice of words is a good one, as in one line, Heaney has depicted all the feelings the mother has and made it very powerful and full of emotion. By stanza five, we still have not been told directly that someone has died. The reference to funerals and grief makes this visible, but in this stanza the death is made clear by the words 'the ambulance arrived with the corpse'. Stanza six tells us that the narrator finally sees his brother 'for the first time in six weeks'. ...read more.

'A four foot box, a foot for every year' is a very moving line on which to end the poem. It tells us the age of the boy and the complete tragedy which was bestowed upon him. He had hardly begun to live his life, yet his existence was snatched away from him. It makes us all see that you can die at any point in your life, whether young, old or middle-aged. The poem makes you want to treasure every day as it could be your last. It also leads you to think of your life and how much you value it very seriously, as it tells of a loss which was so unexpected and tragic. I really enjoyed reading this poem and studying the techniques Heaney uses to make this poem so very moving. It is a deeply emotional poem and I felt moved reading it. Heaney abstains from using dialogue, and this sums up the typical situation perfectly. When people are hit by something so sad and unexpected, they are struck dumb in their grief. I feel that Heaney has made a truly exceptional job of making this such a moving poem and showing very accurately the way people deal with unforeseen tragedy. I found this poem fascinating to read and would certainly recommend this poem to anyone. Mid Term Break Donald N Morrison SG - Folio Work Sir E Scott School Page 1 ...read more.