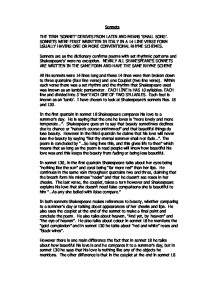 I have chosen to look at Shakespeares sonnets Nos. 18 and 130.

Sonnets THE TERM 'SONNET' DERIVES FROM LATIN AND MEANS 'SMALL SONG'. SONNETS WERE FIRST WRIRTTEN IN ITALY IN A 14 LINE VERSE FORM USUALLY HAVING ONE OR MORE CONVENTIONAL RHYME SCHEMES. Sonnets are as the dictionary confirms poems with set rhythmic patterns and Shakespeare's' were no exception. NEARLY ALL SHAKESPEARE'S SONNETS ARE WRITTEN IN THE SAME FORM AND HAVE THE SAME RHYME SCHEME All his sonnets were 14 lines long and these 14 lines were then broken down to three quatrains (four line verse) and one Couplet (two line verse). Within each verse there was a set rhythm and the rhythm that Shakespeare used was known as an iambic pentameter. EACH LINE is HAS 10 syllables. ...read more.

The poem is concluded by "...So long lives this, and this gives life to thee" which means that as long as the poem is read people will know how beautiful his love was and this keeps the beauty from fading or being less beautiful. In sonnet 130, in the first quatrain Shakespeare talks about her eyes being "nothing like the sun" and coral being "far more red" than her lips. He continues in the same vain throughout quatrains two and three, claiming that the breath form his mistress "reeks" and that he doesn't see roses in her cheeks. The last verse, the couplet, takes a turn however and Shakespeare explains his love that she doesn't need false comparisons she is beautiful to him "...As any she belied with false compare." ...read more.

However there is one main difference the fact that in sonnet 18 he talks about how beautiful his love is and he compares it to a summer's day, but in sonnet 130 he says that his love is nothing like any of the objects he mentions. The other difference is that in the couplet at the end in sonnet 18 he just sums up what he has been saying and draws the sonnet to an end whereas in sonnet 130 he uses the couplet at the end to change the sonnet around and explain the poem. YOU MAKE SOME VALID POINTS OF COMPARISON. COULD YOU ADD SOMETHING ABOUT THE WAY THE FIRST POEM RATHER IDEALISES THE NOTION OF LOVE WHERE THE SECOND IS MUCH MORE DIRECT AND HONEST? CAN YOU PICK OUT EXAMPLES OF THE LANGUAGE THAT TELL YOU THIS? ...read more.