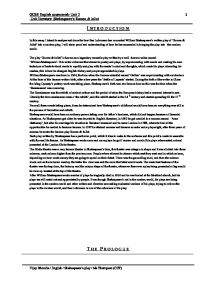 I intend to analyse and describe how Baz Luhrmann has converted William Shakespeare's written play of 'Romeo &amp; Juliet' into a modern play.

INTRODUCTION In this essay I intend to analyse and describe how Baz Luhrmann has converted William Shakespeare's written play of 'Romeo & Juliet' into a modern play, I will show proof and understanding of how he has succeeded in bringing the play into the modern world. The play 'Romeo & Juliet' is known as a legendary romantic play written by a well-known writer named 'William Shakespeare'. This writer reformed the interest in poetry and plays, by experimenting with words and making his own technique of back-to-front words to mystify and play with the reader's mind and thoughts, which made his plays interesting for readers, this is how he changed English history and people appreciate his plays. William Shakespeare was born in 1564, the time when the famous scientist named 'Galileo' was experimenting with modernism. At the time of this famous writers birth, after a few years the 'Battle of Lepanto' started. During the birth of the writer in China the Ming Dynasty's pottery work was taking place. Shakespeare's birth was at a famous time as this was the time when the 'Renaissance' was occurring. The Renaissance was the rebirth of ancient culture and the period of when the European history had a renewed interest in arts. Literally the term renaissance means 'the rebirth', and this rebirth started in the 14th century and started spreading till the 17th century. From all these events taking place, it can be determined how Shakespeare's childhood would have been as everything was still in the process of formation and rebirth. Shakespeare would have been an ordinary person taking over his father's business, which did not happen because of financial situations. As Shakespeare got older he was devoted to English literature, in 1582 he got married to a women named 'Anne Hathaway', but after his marriage his devotion to literature increased and he came London in 1588, where he had all the opportunities he needed to become famous. ...read more.

The whole screen then bursts with a montage of newspaper headlines in the form of fragmentary quotations reprising the Prologue's text ('In fair Verona', 'ancient grudge', 'new mutiny'), with photographs and clippings. Baz Luhrmann has once more made it clear to the audience of what is happening in the city and the words 'fair Verona' are now being contrasted with the prologue and clippings as the words suggests clean and unblemished place, but in actually it is shown in the prologue that the city is in need of help and corruption and the two business rival family wars are the main cause for concern in the city. Viewing the words 'fair Verona' in one minute and people being killed in Verona and violence in the next minute, Luhrmann has used hypocorism. This is an effective technique used by the writer, as it would make the audience argue that Verona is filled with corruption and war and saying 'fair' to this city is totally inconsiderable or wrong. Certain parts of the prologue are shown in words on the screen when the narrator says them; they have been slightly abbreviated by Luhrmann. Shakespeare script version says: 'A pair of star-crossed lovers take their life' Baz Luhrmann abbreviation says: 'A pair of star-cross'd lovers take their life' A difference made by Luhrmann, this is done to shorten the sentences or make an effect. As the prologue is repeated, the words 'take their life' is shown and the 't' in the word 'take' is symbolised as a cross, this suggests it was not meant to be that the lovers take their life and this symbol makes the audience sympathetic to the play. It can also suggest religion and it can refer back to the statue of Jesus, it represents religion, the importance of religion and the power of religion in the play. Baz Luhrmann starts to present all the characters, telling the audience clearly and exactly who each character is, using convictions of the modern world, and each character is introduced in an effective sequence, as the most important people in the story are introduced first. ...read more.

Luhrmann introduces the Capulet family in a more serious practical manner, this is suggested because the Capulet car is a common colour and it has tinted windows; this suggests use of modern features. The colours, which Luhrmann has used for the dressing of the Montague boys, are effective modern colours, and they show the insight of the personality of Montague boys. In contrast the Capulet boys are shown to be very different by Luhrmann, as he has used colour combinations to show the difference of the two households. The Capulet boys dress very different to the Montague boys because they wear dark black clothes and silver shoes, cowboy style. Not only does Luhrmann show use of car colours and the colours of clothes, but to show the darkness of the Capulet household to contrast it with the colourful Montague household, Luhrmann has gone as far as using eye colours to contrast the difference between the two households. When the camera shows a close up shot to the eyes of Tybalt and Benvolio, the difference of the two households is shown by Tybalt's dark brown eyes contrasting with Benvolio's innocent light blue eyes and it can be suggested that Luhrmann used the modern eye technology of eye contacts to create this effect. When Romeo is introduced the background colour of the sun, suggests Luhrmann chose this particular part of Verona to shoot this scene, to separate the love from hate by showing love conquering hate and the colours also gives an idea of the modern use in the play. When Romeo starts to walk, the colours change and from the sun shining on Romeo, the colours become positive and sharp, to portray Romeo coming back to the real world from his dream world. The modern world can be seen in the story, by just looking at the colour of the sky (light blue), which is a modern colour. The costumes work well as an element in the films design, because they illuminate an important element of the character who wears the clothes. The set design, however, is even more complicated in its details. ...read more.