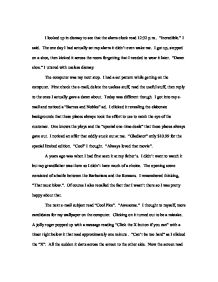 I Looked Up In Dismay

I looked up in dismay to see that the alarm clock read 12:32 p.m.. "Incredible." I said. The one day I had actually set my alarm it didn't even wake me. I got up, stepped on a shoe, then kicked it across the room forgetting that I needed to wear it later. "Damn shoe." I uttered with useless dismay. The computer was my next stop. I had a set pattern while getting on the computer. First check the e-mail, delete the useless stuff, read the useful stuff, then reply to the ones I actually gave a damn about. Today was different though. I got into my e-mail and noticed a "Barnes and Nobles" ad. I clicked it revealing the elaborate backgrounds that these places always took the effort to use to catch the eye of the customer. One knows the ploys and the "special one-time deals" that these places always gave out. I noticed an offer that oddly stuck out at me. "Gladiator" only $10.99 for the special limited edition. "Cool" I thought. "Always loved that movie". A years ago was when I had first seen it at my father's. I didn't want to watch it but my grandfather was there so I didn't have much of a choice. The opening scene consisted of a battle between the Barbarians and the Romans. I remembered thinking, "That must blow.". Of course I also recalled the fact that I wasn't there so I was pretty happy about that. The next e-mail subject read "Cool Pics". "Awesome." I thought to myself, more candidates for my wallpaper on the computer. Clicking on it turned out to be a mistake. A jolly roger popped up with a message reading "Click the X button if you can" with a timer right below it that read approximately one minute . "Can't be too hard" as I clicked the "X". All the sudden it darts across the screen to the other side. ...read more.

We were ordered to get our weapon not any armor.(5) One man stood in the middle alone. He pointed to the man in front. The man being rather large that was calling us forward had a sword too, it was wooden though most likely for a sparing match to see who has what skill.(6) Instantly I thought I was done for, I had no experience in fighting what so ever. I would for sure be hurt badly. This gave me great butterflies in my stomach almost to the point of throwing up. One after another he called each and every man forward until I was reached. "You, come forward!" The man spoke in a loud tone. I moved forward reluctantly. Almost as soon as I got to him he swung his wooden sword. I thought for sure it would strike me and knock me out but to my surprise I swung my sword to meet his. I turned to meet another strike with surprising skill. I then struck the man in the ribs and then across the face. He was knocked out cold on the ground. "Soldier" I heard a voice growl from behind me. Back in line with the rest. Still shocked at what I had just done I walked away while looking at my hands in amazement. Maybe in getting this body I also got the skill this body acquired during it's time in the army. The man that yelled at me walked over and looked me up and down. "You're good with a sword, you're going to have to be because you'll be wearing only chest ant arm protection." Nice, It figures we would be the Retiarius gladiators. That's one thing I actually remembered from history class. Retiarius gladiators were the only ones without head protection and wore practically no protective armor.(7) If I remember correctly we were the more mobile gladiators but were much more susceptible to wounds.(8) ...read more.

I saw one guard stand next to me with a sharpened sword. He spoke, "Head down!" he said. I felt no resistance rise in me for some reason, I felt as though it was a noble death. I would of never of done this in my life back home but this life was different. This life I felt was based on chivalry and virtue. It was time for me to face my destiny. My last sight was that of the soldier bringing the blade forward to meet my neck. I felt nothing. I heard nothing. The world around me faded. I was alone for an eternity. Awaking, I found myself looking At a cream ceiling with the smell of AJAX strong in a room that I had longed to be in. My body the pale white as before. No wounds no well developed muscle. Just me. How long had I been asleep? I looked at my clock. 6:00 in the morning. Early yet. I think I was woke early for a purpose. Maybe to reflect. I saw all my every day problems fade away at the thought of being sent to such a place again. The world back in that time was a harsh one that was there to teach lessons of manhood and nobility. A world where one man had the all foreseeing power to do what he wished. This frightened me now more than when I was there. How did our world survive. I only lasted two days in that awful place. That was more than enough for me to see that this world now was a great place and that was to cherish it for all I could and never to let any of it's precious moments go. The Days of a Gladiator Tom Loveless Dr.Ruane Mon/Wed-5:00 Quad 1 FOOT NOTES (7), (8), (9), (10), (12), (13), (14), (15), (16), (17) = http://www.vroma.org/~bmcmanus/arena.html. (1), (2), (3), (4), (19) = http://campus.northpark.edu/history/WebChron/Mediterranean/MAurel ius.html. (5), (6), (11), (18), (20), (21), (22) = http://ablemedia.com/ctcweb/consortium/gladiator1.html. ...read more.