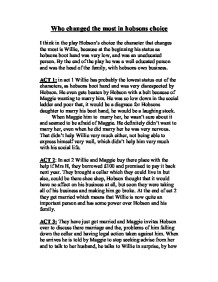 I think in the play Hobson's choice the character that changes the most is Willie, because at the beginning his status as hobsons boot hand was very low, and was an uneducated person

Who changed the most in hobsons choice I think in the play Hobson's choice the character that changes the most is Willie, because at the beginning his status as hobsons boot hand was very low, and was an uneducated person. By the end of the play he was a well educated person and was the head of the family, with hobsons own business. ACT 1: in act 1 Willie has probably the lowest status out of the characters, as hobsons boot hand and was very disrespected by Hobson. He even gets beaten by Hobson with a belt because of Maggie wanting to marry him. He was so low down in the social ladder and poor that, it would be a disgrace for Hobsons daughter to marry his boot hand, he would be a laughing stock. ...read more.

They brought a cellar which they could live in but also, could be there shoe shop, Hobson thought that it would have no affect on his business at all, but soon they were taking all of his business and making him go broke. At the end of act 2 they get married which means that Willie is now quite an important person and has some power over Hobson and his family. ACT 3: They have just got married and Maggie invites Hobson over to discuss there marriage and the, problems of him falling down the cellar and having legal action taken against him. When he arrives he is told by Maggie to stop seeking advise from her and to talk to her husband, he talks to Willie in surprise, by how much he knows about business. ...read more.

Willie half a share in his business, Hobson did not want this but after what the doctor has said he allows this to happen. Willie becomes the leader of the family and takes a half share in the business. They sell their shop and move into Hobsons shop. He is now so confident that he even tells Hobson what they are going to call the shop. Willie has changed the most from being told what to do and walked all over at the beginning of the book, to becoming the head of the family. He is so confident now and educated, he could even talk about business in comfort. He is now a huge member of the family and from nothing he has come a long way By Jason Moore 10H ...read more.