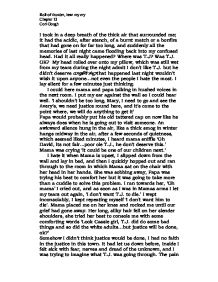 I took in a deep breath of the thick air that surrounded me; it had the acidic, after stench, of a burnt match or a bonfire that had gone on for far too long, and suddenly all the memories of last night came flooding back into my confused head. Had it all really happened? Where was T.J? Was T.J. OK? My head rolled over onto my pillow, which was still wet from my tears during the night admit I don't like T.J. but he didn't deserve anything that happened last night wouldn't wish it upon anyone...not even the people I hate the most. I lay silent for a few minutes just thinking. I could here mama and papa talking in hushed voices in the next room. I put my ear against the wall so I could hear well. 'I shouldn't be too long, Mary, I need to go and see the Avery's, we need justice round here, and it's come to the point where, we will do anything to get it' Papa would probably put his old tattered cap on now like he always does when he is going out to visit someone. An awkward silence hung in the air, like a thick smog in winter hangs midway in the air, after a few seconds of quietness, which seemed liked minutes, I heard mama sniffle 'Oh David, its not fair...poor ole T.J., he don't deserve this.' ...read more.

'I I I'm sorry Miz.Crocker' I stuttered 'Does that excuse your lateness?' She bellowed in an authoritative tone 'Looks like the Logans are going down in their standards' I felt cheated and hurt that she had the cheek to criticise my family when she was so horrid. 'It's not my family's fault Miz'. She looked down on me as if I was muck on the classroom floor. 'Never Never answer back to me Cassie Logan, and you address me properly, I am a teacher not one of your friends, its Miz.Crocker to you not Miz.' She paused and took in a deep breath of air 'You better go and get seated in your seat Logan child before you get a whipping. Now get moved.' You know that feeling, the one deep down in your stomach? The one that makes you feel as if it's going to be 'one of those days'? I had that...I'm sure there are a hundred butterflies down there. I decided to get on with my sums and keep a low profile, I pulled out my math book and pencil 7+6=13 So 13 -7 must be 6...these were too easy, I flew through the work and slipped into a blank daydream. 'See you all after the break. Class dismissed' All the class stood up and sighed in relief, there were sounds of talking and laughter. ...read more.

'Now for the good bit.' The white man laughed and pulled away the station on which the four black boys and men stood. T.J. was coughing and spluttering, how could I help him? None of my plans were going to solve this one and I felt completely useless. Stacey kept his eyes locked on T.J., T.J. was fighting for breath like an exhausted athlete. Stacey clenched my hand harder, 'Lets go.' He pulled me away from the cheering audience. He led me under a tree, there he collapsed. I stared at him, not knowing quite what to do. He was banging the sandy ground with his fists, fat tears rolling down his face, like snowballs down a mountain. 'Why?' he kept on sobbing, I don't think it was an answer he was looking for, his dark face was buried in tin the sand while his fists banged the ground. I knelt down to him, the words got stuck in my throat, I was silent. I wish Papa were here to comfort Stacey. He was so alone now and he knew it. T.J. and Stacey were so close. What was the future going to hold out for Stacey? As far as Stacey was concerned, his life was over too. And what about the land? How can we survive without Papa's work? Now Mamas out of a job, we need all the money. The whites had won this game, now we had to plan another one, one that we will win. We will win. Roll of thunder, hear my cry Chapter 13 Cori Gough ...read more.