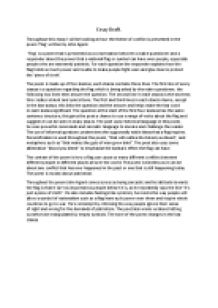 I will be looking at how the theme of conflict is presented in the poem Flag written by John Agard.

ï»¿Essay Draft. Throughout this essay I will be looking at how the theme of conflict is presented in the poem ‘Flag’ written by John Agard. ‘Flag’ is a poem that is presented as a conversation between a naïve questioner and a responder about the power that a national flag or symbol can have over people, especially people who are extremely patriotic. For each question the responder explains how the flag holds so much power and is able to make people fight wars and give lives to protect the ‘piece of cloth’. ...read more.

The question at the start of the first four stanzas has the same sentence structure; this gives the poet a chance to use a range of verbs about the flag and suggests it can be seen in many places. The poet uses rhetorical language in this poem, he uses powerful commands and sarcastic language to involve and challenge the reader. The use of informal questions undermines the supposedly noble ideas that a flag inspires. Personification is used throughout the poem, ?that will outlive the blood you bleed?, and metaphors such as ?that makes the guts of men grow bold?. ...read more.

The poem is mostly about patriotism. Throughout the poem John Agard comes across as being sarcastic and his attitude towards the flag is that it isn?t as important as people believe it is, as he repeatedly says the line ?it?s just a piece of cloth?. He also includes feelings like cynicism; he mocks the way people will allow a symbol of nationalism such as a flag have such power over them and inspire whole countries to go to war. He?s contempt by criticising the way people ignore their sense of right and wrong for the demands of patriotism. The poet also warns us about letting ourselves be manipulated by empty symbols. The tone of the poem changes in the last stanza. ...read more.