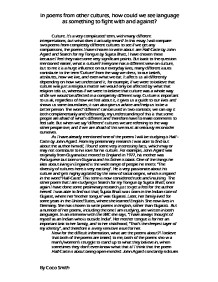 I will compare two poems from completely different cultures to see if we get any comparisons, the poems I have chosen to write about are Half-Caste by John Agard and Search for my Tongue by Sujata Bhatt,

Culture. It's a very complicated term, with many different interpretations, but what does it actually mean? In this essay I will compare two poems from completely different cultures to see if we get any comparisons, the poems I have chosen to write about are Half-Caste by John Agard and Search for my Tongue by Sujata Bhatt, I have chosen these because I feel they raise some very significant points. But back to the question mentioned earlier, what is culture? Everyone has a different view on culture, but to me it is a huge influence on our everyday lives, many different issues contribute to the term 'Culture' from the way we dress, to our beliefs, attributes, how we live, and even what we eat. It affects us all differently depending on how we understand it, for example, if we were to believe that culture was just a religious matter we would only be affected by what that religion tells us, whereas if we were to believe that culture was a whole way of life we would be affected in a completely different way. Culture is important to us all, regardless of how we feel about it, it gives us a guide to our lives and shows us some boundaries; it can also give us advice and help us to be a better person. The word 'different' can be used in two contexts; we can say it both complimentarily and offensively, my understanding of this is that some people are afraid of what's different and therefore have to make comments to feel safe. ...read more.

colours together and the English weather being completely the same every single day, to me these pictures are impossible to imagine and therefore shock the audience into waking up and realising how ridiculous any of these situations would be. There are other parts to the poem that have the same effect, for instance; how can anyone only close half an eye when they sleep, only dream half a dream or cast only half a shadow? The imagery in this poem is uncomfortably unreal and therefore the audience are forced to listen, to me the way John Agard talks to the audience could be seen as aggressive and therefore could give the wrong impression about what he is trying to say. The structures of both of the poems are quite similar, for example; both poems use phonetic language, which means they are both written in the authors own dialect/language, this can seem threatening to the audience as they may find it hard to understand just what the poet is saying and therefore feel uneasy. In Half-Caste the poem is written in 5 stanzas of varying lengths, the lines in the poem are short, I get the impression this is the really get his message across. The use of language in this poem works extremely well because it shows us he's not afraid of what anyone thinks about him or his culture, we could see this as something to fight about. In Search for my Tongue the poem is written in 3 sections, the poet expresses how hard it is for her to know ...read more.

Overall though she seems to come to a conclusion but all of the time she has been fighting with culture. The language in Half-Caste is being used to fight racists, we can tell that John Agard is not happy with the way he is being looked upon and therefore takes matters into his own hands. Sujata Bhatt on the other hand is fighting the voices in her head that are telling her that she cannot be part of two cultures and that she cannot speak two languages, by the end of the poem though she seems to have won the fight. In conclusion, everyone looks upon culture differently; there are those who take it seriously and those that don't. But whether or not we like it we are all part of a culture and should therefore respect other's. Of course culture can be seen as something to fight with, there are so many people in the world with different views it would be surprising if it wasn't! In my opinion both authors use language as something to fight with and against in their own unique ways. Both of these poems use some sort of violence to get a message across, this to me is a type of fighting, so the answer to my question is 'YES' we could see culture as something to fight with or against because of the language both poems use, for instance the taunting that John Agard uses and the metaphors that Sujata Bhatt uses. ?? ?? ?? ?? In poems from other cultures, how could we see language as something to fight with and against? By Coco Smith ...read more.