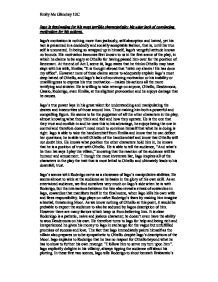 Iago is fascinating for his most terrible characteristic: his utter lack of convincing motivation for his actions.

Iago is fascinating for his most terrible characteristic: his utter lack of convincing motivation for his actions. Iago's motivation is nothing more than jealously, self-absorption and hatred, yet his tact is presented in a decidedly and socially acceptable fashion, that is, until his true self is uncovered. In being so wrapped up in himself, Iago's vengeful attitude knows no bounds. His motivation becomes first known to us in the first scene of the play, in which he claims to be angry at Othello for having passed him over for the position of lieutenant. At the end of Act I, scene iii, Iago states that he thinks Othello may have slept with his wife, Emilia: "It is thought abroad that 'twixt my sheets / He has done my office". However none of these claims seems to adequately explain Iago's most deep hatred of Othello, and Iago's lack of convincing motivation or his inability or unwillingness to express his true motivation-makes his actions all the more terrifying and sinister. He is willing to take revenge on anyone, Othello, Desdemona, Cassio, Roderigo, even Emilia, at the slightest provocation and he enjoys damage that he causes. Iago's true power lays in his great talent for understanding and manipulating the desires and insecurities of those around him. ...read more.

However because of the dramatic irony Iago establishes, the audience is forced into a position of feeling intimately connected with Iago's villainy. In many ways, Iago is the driving force behind the plot; he inspires much of the action of the play. His self-conscious falseness is highly theatrical, manufactured in order to shock the audience. Iago is a classic two-faced villain, a type of character known in Shakespeare's time as a "Machiavel", a villain who lets nothing stand in his way in his quest for power. He is also reminiscent of the stock character of Vice from medieval morality plays, who also announces to the audience his diabolical schemes. As aforementioned Roderigo is certainly a pathetic character, evident by the fact that he does not even succeed in killing Cassio. Unwittingly, Roderigo causes Iago's plan to be disrupted for the first time in the play. Therefore, Iago is forced to b****y his own hands, also for the first time in the play. He displaying a talent for improvisation, Iago takes the burden of action into his own hands because he has no other choice. Neither Lodovico, Graziano, nor Cassio shows the slightest suspicion that Iago is somehow involved in the chaos. ...read more.

Characters in this play seem to be the product of certain inevitable, natural forces, which, if left alone, will grow wild. Iago understands these natural forces very well. According to his own metaphor he is, a good "gardener," both of himself and of others. Many of Iago's references concern poison, "The Moor already changes with my poison. / Dangerous conceits are in their natures poisons..." Iago cultivates his "conceits" so that they become lethal poisons and then plants their seeds in the minds of others. The organic way in which Iago's plots consume the other characters and determine their behaviour makes his conniving, evil personality seem like a force of nature. That organic growth also indicates that the minds of the other characters are fertile ground for Iago's efforts. As well as plants and poison Iago also refers frequently to animals, mostly when describing Othello. Iago calls Othello a "Barbary horse," an "old black ram," and also tells Brabanzio that his daughter and Othello are "making the beast with two backs". Iago tells Othello to beware of jealousy, the "green-eyed monster which doth mock/ the meat it feeds on". The imagery of the monstrous and diabolical takes over where the imagery of animals can go no further, presenting the jealousy-crazed characters not simply as brutish, but as grotesque, deformed, and demonic. Iago is a master at manipulating language and imagery. ...read more.

This essay superbly responds to the question, given that it doesn't explicitly push much discussion. I liked how the essay explores Iago's apparent changing of motivations throughout. I would like to comment slightly on this task - many candidates at ...

This essay superbly responds to the question, given that it doesn't explicitly push much discussion. I liked how the essay explores Iago's apparent changing of motivations throughout. I would like to comment slightly on this task - many candidates at GCSE level may see this question as an opportunity to retell or narrate Iago's character. Although it doesn't ask "To what extent" or "discuss" it is key to analyse and evaluate, and this essay has done so.

The analysis in this essay is strong, although there are still places for improvement. I liked how quotes were embedded well, allowing a close analysis of language and imagery. The discussion of imagery is particularly strong, reflecting upon the choice of imagery to his manipulation. There is a constant awareness of an audience response, allowing a natural progression to evaluating the dramatic effect of Iago's qualities. I am big fan of any Shakespeare essay which shows understanding that it is a play! However, the weak point of this essay is that lack of focus on Shakespeare's construction. The essay is written as if Iago is real, talking about his choices to manipulate Othello. It is key at any level to show understanding that Shakespeare is constructing Iago and his actions to have a dramatic effect (or otherwise). Doing so would enable this essay to gain higher marks.

This essay is structured well, having a clear introduction and conclusion. Each paragraphs adds a new point to the argument, and I particularly like how the first sentence is short and concise, offering a clear signpost to what will be elaborated upon. Having such clear signposts allows the essay to stay on focus throughout the paragraph. Spelling, punctuation and grammar are used to emphasise arguments and there are very few flaws in syntax.