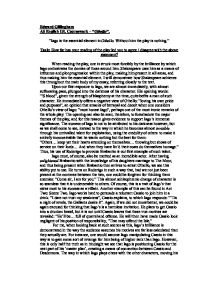 &quot;Iago is the essential element in Othello. Without him the play is nothing.&quot;

Edward Gillingham AS English Lit. Coursework - "Othello". "Iago is the essential element in Othello. Without him the play is nothing." Task: How far has your reading of the play led you to agree / disagree with the above statement? When reading the play, one is struck most forcibly by the brilliance by which Iago orchestrates the demise of those around him. Shakespeare uses him as a means of influence and plot progression within the play, making him present in all areas, and thus making him the essential element. I will demonstrate how Shakespeare achieves this throughout the main body of my essay, referring closely to the text. Upon our first exposure to Iago, we are almost immediately, with almost suffocating pace, plunged into the darkness of his character. His opening words: "'S blood", given the strength of blasphemy at the time, quite befits a man of such character. He immediately offers a negative view of Othello: "loving his own pride and purposes", an opinion that smacks of betrayal and deceit when one considers Othello's view of Iago: "most honest Iago", perhaps one of the most ironic remarks of the whole play. The opening can also be seen, therefore, to foreshadow the major themes of the play, and for this reason gives evidence to support Iago's immense significance. ...read more.

By far the most blatant example of Iago's ability to deceive and cheat the other characters is found in his utter manipulation of Othello. Here Iago, however, also brings into play the brilliant cunning Shakespeare has granted his character. He knows that Othello cannot be guided simply by bare faced lies the way Roderigo can. Thus, in Act Three: Scene Three, we see Iago begin to construct the basis of Othello's jealousy by firstly forming doubt in his mind. He has already demonstrated his powers of persuasion by persuading Cassio to drink, but here allows Othello to persuade himself. Iago begins by raising the point of Cassio's relationship with Desdemona: "Did Michael Cassio, when he woo'd my Lady, know of your love?" This is of course relatively 'out of the blue' for Othello, an effect that Iago utilises well here, and thus cannot be left alone by Othello when Iago tries to drop the subject. In this way Iago has most cleverly succeeded in arousing Othello's suspicions: "Nay, there's more in this?" he then proceeds to tell Othello of his worries, while constantly working to assure Othello of his sincerity: "My Lord, you know I love you". One can see that he does this, not only to assure Othello, but also to assure himself that his lies will succeed in fooling his master. ...read more.

One may also feel that it is at this point that Iago has totally achieved his goal. He has taken the self assured general, and warped him into that which now lies at his feet. He has inflicted upon Othello his first and possibly most prolific defeat signifying, most overtly, the beginning of the end. He, with the possible exception of Roderigo, is the only character with a true purpose throughout the play: the demise of Othello. Although the other characters can obviously be seen to have their own lives and tasks, it is ultimately Iago who sets the stage for others to act upon, thus this is again evidence to support his vitality to the play. The brilliance of Iago, and for that reason the fuel behind his fundamental role within the play, lies most in his ability to make others believe they are thinking for themselves, whilst manipulating their thoughts. It is this skill that positions him so that he is able to have an effect on the lives of everyone he wishes. Throughout the play the audience see this entire thought process take shape and has it played out before us. It is this which makes him arguably one the most accessible character, while remaining Shakespeare's most labyrinthine. ...read more.