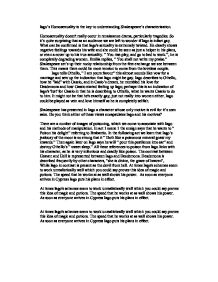 Iago's Homosexuality is the key to understanding Shakespeare's characterisation

Iago's Homosexuality is the key to understanding Shakespeare's characterisation. Homosexuality doesn't really occur in renaissance drama, particularly tragedies. So it's quite surprising that as an audience we are left to wonder if Iago is infact gay. What can be confirmed is that Iago's sexuality is extremely twisted. He clearly shows negative feelings towards his wife and she could be seen as just a helper in his plans, or even a cover up to his true sexuality. " You rise play, and go to bed to work.", he is completely degrading women. Emilia replies, " You shall not write my praise." Shakespeare set's up their rocky relationship from the first exchange we see between them. ...read more.

It might not be that he's exactly gay, just not really into women either. Iago could be played as vein and love himself as he is completely selfish. Shakespeare has presented in Iago a character whose only motive is evil for it's own sake. Do you think either of these views encapsulates Iago and his motives? There are a number of images of poisoning, which we come to associate with Iago and his methods of manipulation. In act 1 scene 1 the ensign says that he wants to " Poison his delight" referring to Brabantio. In the following act we learn that Iago's jealousy of the moor is so strong that it " Doth like a poisonous mineral gnaw my inwards." ...read more.

Although the first task is ridiculous, this essay engages with the question quite well. It is key to note that there are two questions being set here! I would've liked to have seen some links to a contemporary audience shunning ...

Although the first task is ridiculous, this essay engages with the question quite well. It is key to note that there are two questions being set here! I would've liked to have seen some links to a contemporary audience shunning homosexuality, thus linking this to their hatred of Iago's demonic qualities and his manipulation over Othello. There are some brash assumptions made with the homosexuality question. The section regarding motives also engages well with the task, exploring the poison imagery well.

The analysis in this essay is sound, but I would've liked to seen more close analysis of language and imagery techniques. I did like how this essay shows potential in addressing Shakespeare's constructs, rather than writing as if the characters dictate their actions. However, this is only done a few times, whereas it should be done throughout! There is little awareness of the audience response or dramatic effect when analysing quotes. If I were doing this essay, I would be confident with my argument, suggesting Iago's homosexuality is used by Shakespeare to make the audience hate him further. Being bold with an argument, if evidence is there, rather than sitting on the fence will gain credit! I like how the essay picks up on Iago's use of poison imagery, however there is little discussion of what effect it has. There is no use picking out a good point if it's not fully elaborate upon.

The essay has a clear introduction, but is lacking a solid conclusion. The last paragraph is duplicated which in my opinion shows a lack of effort to proof read! The language used is overly colloquial at times "we are left to wonder if Iago is in fact gay" which should be avoided. I would have liked to have seen "the audience" used in place of "we" but other than that spelling, punctuation and grammar are fine.