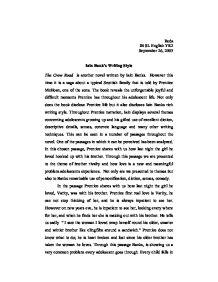 Reda IB SL English YR2 September 26, 2003 Iain Bank's Writing Style The Crow Road is another novel written by Iain Banks. However this time it is a saga about a typical Scottish family that is told by Prentice McHoan, one of the sons. The book reveals the unforgettable joyful and difficult moments Prentice has throughout his adolescent life. Not only does the book disclose Prentice life but it also discloses Iain Banks rich writing style. Throughout Prentice narration, Iain displays several themes concerning adolescents growing up and his gifted use of excellent diction, descriptive details, senses, concrete language and many other writing techniques. This can be seen in a number of passages throughout the novel. One of the passages in which it can be perceived has been analyzed. In this chosen passage, Prentice shares with us how last night the girl he loved hooked up with his brother. Through this passage we are presented to the theme of brother rivalry and how love is a new and meaningful problem adolescents experience. Not only are we presented to themes but also to Banks remarkable use of personification, diction, senses, comedy. In the passage Prentice shares with us how last night the girl he loved, Varity, was with his brother. Prentice first real love is Varity, he can not stop thinking of her, and he is always inpatient to see her. ...read more.

To make Prentice even a more realistic character Banks makes him narrate in his dialect Scottish language. For example he says "I'd conked out some time before everybody else" and he calls shoes "Docs". Prentice is also seen as a practical and amusing character when he says bad words. In the passage he says, "I felt like s**t" and at the end of the passage he says, "f**k it". The use of bad words also makes young readers interested to read on since they find it "cool". When Prentice shares with us his heartrending love experience the tone is very depressing. However Iain Banks does not want to make the story sober so he includes some comedic lines which make it more joyous for the readers. The comedic lines are seen when Prentice asks the girls what he should do to forget about Varity, and one of them answers "you must think of her on the toilet." The answer makes the readers have a laugh and thus makes the book's tone joyful. Usually Banks uses black humor but his time he just includes a comedic line to make the passage more cheerful but also used to make sure the readers do not get bored and get attached to the book. Through this passage we are not only offered comedic lines but also lines of writing representing Banks use of diction and descriptive details. ...read more.

Personification and similes are used in order to. Give enchanting content of imagination to readers. When describing the water up in the hills that go down the spillways he uses a personification. He gives water a human characteristic by describing it as "Marching water" hard to imagine stamping water. In addition, he also uses similes in the passage. For example, he says the girl he loved wrapped herself round his older brother "like Clingfilm around a sandwich." This simile is kind of humorous if it can be imaged, seems weird when imagined. But since it is weird it makes it pleasing and fun to imagine. He also uses a simile to compare the noise of water to stamping feet, he says "The water cascaded down the face of the spillway again, the noise like a million stamping feet heard from a long way off." Through this simile we have to use are sense of auditory. In conclusion, the analyzed passage displays points on brother rivalry and love while in the same time displaying Banks remarkable use of personification, diction, senses, and comedy. This passage is much like other passages in the book because through out the story Iain Banks uses remarkable visual details to give the readers a perfect image of the situation Prentice is in. throughout the novel Banks makes the tone and mood of the book more cheerful, even though the characters are in a dark and sad state of mind, he does this and make sure the readers are not bored and are still attached to the book. ...read more.