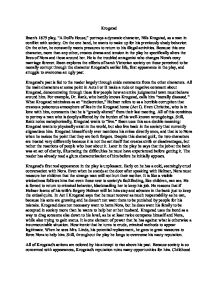 Ibsen's 1879 play, A Doll's House, portrays a dynamic character, Nils Krogstad, as a man in conflict with society. On the one hand, he wants to make up for his previously shady behavior.

Krogstad Ibsen's 1879 play, "A Doll's House," portrays a dynamic character, Nils Krogstad, as a man in conflict with society. On the one hand, he wants to make up for his previously shady behavior. On the other, he constantly meets pressures to return to his illegal activities. Because this one character, more than any other, creates drama and tension in the play he specifically alters the lives of Nora and those around her. He is the troubled antagonist who changes Nora's cozy marriage forever. Ibsen explores the effects of harsh Victorian society on those perceived to be morally corrupt through the character Krogstad's earlier life, first appearance in the play, and struggle to overcome an ugly past. Krogstad's past is fed to the reader largely through snide comments from the other characters. All the main characters at some point in Acts I or II make a rude or negative comment about Krogstad, demonstrating through these few people how an entire judgmental town must behave around him. ...read more.

It is like a visible wickedness follows him that even those new to society's faultfinding, like children, can see. He is forced to return to criminal behavior, blackmailing her to keep his job. He reasons that if Helmer learns of his wife's forgery Helmer will let him stay and advance in the bank just to keep the ordeal quite. In Act I Krogstad says that he must recover as much respectability as he can, because his sons are growing and he doesn't not want them to be punished by people for his mistake. Krogstad does not necessary want to harm Nora, but he does want his family to be accepted in society more than he wants to help her or her husband. Krogstad uses the bond as a way to drag someone else down to his level, as he at least twice compares himself and Nora, while also trying to gain status. It is one element of power that he has against what is otherwise a insurmountable situation. ...read more.

By doing this, Christine fulfills his need for support and encouragement that he was seeking from society, therefore negating his extreme efforts to keep the bank position. The "happy change" he refers to in his note can definitely be attributed to the two ship-wrecked souls finding their way back to each other. With this acceptance from Christine, he is finally able to overcome his criminal past by giving back the bond and forfeiting his blackmail attempt. In conclusion, Krogstad is disadvantaged by his own reputation. His past continues to harm him now, and the fact that he resorts to something illegal to get what he wants proves that the society that pressures him only serves to force him back into the mold that they have crafted for him. It isn't until Christine accepts him as he is, with full knowledge of his crime, that he can put immoral activities behind him and return to a legitimate life. In many ways Krogstad is a victim of strict, unforgiving Nineteenth Century norms just like Nora. ...read more.