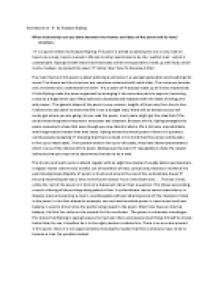 If by Rudyard Kipling. What relationship can you draw between the themes and ideas of the poem and its form/ structure

﻿Homework on ? If? by Rudyard Kipling. What relationship can you draw between the themes and ideas of the poem and its form/ structure. ? If? is a poem written by Rudyard Kipling. The poem is aimed at advicing his son or any male on how to be a man, how to succed in life and in other owrds how to be the ? perfect man? which is unattainable. Kipling himself knew that these tasks will be immpossible to meet up with fully, which is why I believe he named this poem ?If? rather than ?How To Become A Man?. The main theme in this peom is about advicing a someone in a younger generation and teaching him moral. The theme and the structure are somehow entwined with each other. The more you decode one, the better you understand the other. ...read more.

If the person were to live up to this tasks, they have shown perseverance which is one of the themes of this poem. Kipling uses the word ?if? repeatedly to show the reader indirectly that you need to be determined inorder to be a man. The structure of each verse is almost regular with an eight line stanza of usually iambic pentameters, a regular rhyme scheme and a skilful use of repetition of lexis, syntax and prosody to reinforce the points being made.Majority of poem is structured around the use of the surbodinate clause ?if? the only exsemting the last 2 lines in the fourth stanza ?Yours is the Earth and...? . The last 2 lines, unlike the rest of the poem is in form of a statement rather than a question. This shows and ending, a result of doing all these things being asked of him. ...read more.

Compare this poem to another in the Anthology in the areas of Mood/Tone and Subject Matter. Express your views about the two authors? attitudes in presenting the issues in their separate poems. I will be comaparing ?If? by Rudyard Kipling to ?Once Upon a Time? by Gabriel Okara. ?If? is a poem aimed at Kipling?s son or in general to any growing young male. It expresses the values needed to become a man and advices on how to do so. ?Once Upon a Time? is a poem which is directed from a father to his son about the way the western values have influenced the cultures he was brought up with ? the African culture. Both poems explore the concept of childhood, they both speak from the perspective of an older one, one who was expericened it first hand. These poems have quite similarities. One of the key similarities is the subject matter. ?If? is foucused at Kipling?s son in the same manner, ?Once Upon a Time? is aimed at his own son. Possessions ...read more.