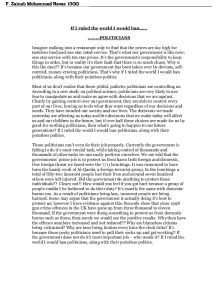 If I Ruled the World I'd Ban Politicians.

If I ruled the world I would ban...... .........POLITICIANS Imagine walking into a restaurant only to find that the prices are sky high for tasteless food and one star rated service. That's what our government is like now; one star service with ten star prices. It's the government's responsibility to keep things in order, but in reality it's their fault that there is so much chaos. Why is this the case?? It's because our government has been taken over by devious, self-centred, money-craving politicians. That's why if I ruled the world I would ban politicians, along with their pointless politics. Most of us don't realise that these pitiful, pathetic politicians are controlling us. According to a new study on political science, politicians are very likely to use fear to manipulate us and make us agree with decisions that we are against. Clearly by gaining control over our government, they are able to control every part of our lives, forcing us to do what they want regardless of our decisions and needs. They have invaded our society and our lives. The decisions we made yesterday are affecting us today and the decisions that we make today will affect us and our children ...read more.

If I ruled the world I would ban politicians, along with their pointless politics. Politicians are commonly known for breaking promises. They usually make election promises in order to gain more votes from the public just before an election take place, but all the promises they make to bring "change" to the world are all complete falsehood! Richard Nixon was a politician who ran for the American presidential elections in 1968. He promised America that he would "resolve the Vietnam War" and "bring the troops home". However a year later, in 1969, the war was still raging. Clearly Nixon never planned on ending the war; his promise was no more than a public attention grabber. Politicians are nothing but impostors who see breaking promises as a way of tricking us into voting for them. Is it fair to falsely raise the hope of the public then disappoint them by doing the exact opposite? No it's not! It's like telling a toddler that you'll give them sweets but instead you give them the wrapper! It's complete torture! A few may argue that it's not the politician's fault that they don't keep promises because the results are not always in their control. ...read more.