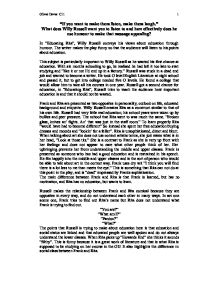 &quot;If you want to make them listen, make them laugh&quot; - What does Willy Russell want you to listen to and how effectively does he use humour to make that message appealing?

"If you want to make them listen, make them laugh." What does Willy Russell want you to listen to and how effectively does he use humour to make that message appealing? In "Educating Rita", Willy Russell conveys his views about education through humour. The writer makes the play funny so that the audience will listen to his points about education. This subject is particularly important to Willy Russell as he wasted his first chance at education. With six months schooling to go, he realised he had left it too late to start studying and "like it or not I'd end up in a factory." Russell was stuck in a dead end job and wanted to become a writer. He took O level English Literature at night school and passed it, but to get into college needed five O levels. He found a college that would allow him to take all his courses in one year. Russell got a second chance for education, in "Educating Rita", Russell tries to teach the audience how important education is and that it should not be wasted. Frank and Rita are presented as two opposites in personality, outlook on life, educated background and etiquette. Willy Russell creates Rita as a construct similar to that of his own life. Russell had very little real education; his school years were taken up by bullies and peer pressure. The school that Rita went to was much the same. "Broken glass, knives an' fights. ...read more.

Rita has not seen a live play before, and Frank wittily says that she "may not see a 'live' play" tonight. The use of the word "live" is comical because, Frank is suggesting that as it is an amateur production, the actors will perform badly. This is as may be, but Rita is still very excited. In Scene Six, she has now seen a professional performance of 'Macbeth'. Rita now realises that it takes skill to act a play well. Russell wants the audience to see that while Rita is trying to change on the inside she is still struggling with the educated class image. At the end of scene six, Frank asks Rita to come to dinner at his house with a few others. Rita wants to know what to wear. This would only be an alteration on the outside and not a development in her education. Russell is showing the audience that to move forward in education it is important to change from the inside. Frank thinks that Rita can fit in with their conversation and what she wears is not important. In Scene Seven we find that Rita could not make it to dinner. She did not know what to wear, and had brought the wrong sort of wine. These are both superficial. Rita was also unaware of the type of conversation appropriate for the educated classes. When Russell is addressing important issues, he sometimes leaves out the comedy. ...read more.

Russell is showing that education alters everyone to be the same, and if you stop finding things out for yourself, you become dependant on others. In scene seven, Rita realises that she has learnt a lot but it is not her thoughts. Russell is saying that the ability to pass exams does not mean that one is educated. She realised that she had "just ended up with a load of quotes an' empty phrases;" She wanted an education so much that she did not want to be questioned when she did something. Russell shows that it is not always good to rely on other people for everything when he has Trish try and "top herself". The comedy comes back in this scene. Frank has been sent to Australia and he talks about their most famous beer, "Forster's Larger...of course they get the spelling wrong." Frank has still not lost his wit. At the end of the scene Frank gives Rita a dress, he bought it to try and keep the old Rita. Willy Russell is giving another example of education changing people so that they loose their individuality. Throughout "Educating Rita" Russell makes three main points about education. Education should be taken advantage of, "A hungry mind, in itself, is not a guarantee of success." Education should be a change from the inside, not a superficial one, and "you'll have a much better understanding of something if you discover it in your own terms." Russell conveys these points, and a few others, effectively throughout the play and with the use of comedy, Frank's dry wit and the clash of social backgrounds, keeps the audience listening. Oliver Dover C11 1 ...read more.