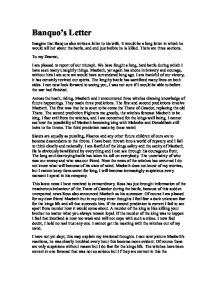 Imagine that Banquo also writes a letter to his wife. It would be a long letter in which he would tell her about the battle, and end just before he is killed. There are three sections.To my Dearest,

Banquo's Letter Imagine that Banquo also writes a letter to his wife. It would be a long letter in which he would tell her about the battle, and end just before he is killed. There are three sections. To my Dearest, I am pleased to report of our triumph. We have fought a long, hard battle during which I have seen many unsightly things. Macbeth, yet again has shone in bravery and courage, without him I am sure we would have surrendered long ago. I am thankful of our victory, it has certainly revived our spirits. The lengthy battle has sacrificed many lives on both sides. I can now look forward to seeing you, I was not sure if I would be able to before the war had finished. Across the heath, riding, Macbeth and I encountered three witches claming knowledge of future happenings. They made three predictions. The first and second predictions involve Macbeth. The first was that he is soon to be come the Thane of Cawdor, replacing the old Thane. The second prediction frightens me greatly, the witches forecast Macbeth to be king. I fear evil from the witches, and I am concerned for the kings well being. I cannot see how the possibility of Macbeth becoming king with Malcolm and Donaldbain still heirs to the throne. ...read more.

I travelled with the king to Dunsaine where Macbeth was the host to a celebratory banquet. The mood was strange, I did not know what to say to the king without feeling a traitor. I had to force myself to make polite conversation, I am now sure he thinks there are suspicious thoughts about me in my head. The castle itself was alive with the atmosphere, everybody was relieved at the victory, and pleased that all the important people were attending the banquet. The conversation was much the same as many other formal banquets I have attended. Lady Macbeth looked wonderful, she was thriving on playing the hostess. She did, however, act strange, especially around her husband. Everything she did was with a sense of urgency. I felt an uneasy tension and atmosphere between Macbeth and Lady Macbeth. It was frightening, like they were planing a conspiracy. I tried to avoid any contact between us, although all I could concentrate as their actions. My suspicions increased during and after the banquet had finished. Although I had remained fixated with the hosts actions there was a short period where I could not account for Macbeth or Lady Macbeth. I thought I saw Macbeth leave the great hall shortly followed by his wife. ...read more.

This I am already finding it hard to do so. He is jumpy and does not seem to be acting the same way as everybody else. Not only is it Macbeth that frightens me deeply, but the fact that the three witches being correct. If the third prediction is to be between many people are that Scotland has been betrayed. Country is exhausted after the war with the Norwegian rebels and cannot cope, many feel a downfall is soon to become reality. I miss your great wisdom and I pray that this letter reaches you safely. I must leave this letter in the capable hands o this anonymous messenger. There is far correct I panic for Fleance and his wellbeing. The dark evil I fee has not finished, I believe this murder has caught the taste for blood and may be ready to strike again. I am certain that I am not alone in my suspicions and concerns. At Macbeth coronation man of the lords and advisers to Duncan did not attend, out of fear for their lives but as loyalty to the true rightful king Malcolm. The event did not hold any importance and was an anti-climax to all the events of the past few days. The feelings too much detail contained in this letter so I ask you kindly to destroy it as it could lead to harm for all of us. Your loving husband, Banquo. ...read more.