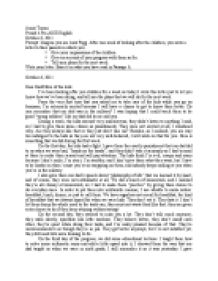 Imagine you are Aunt Pegg. After one week of looking after the children, you write a letter to their parents

﻿Annie Tonnu Period 4 Pre-AICE English October 6, 2011 Prompt: Imagine you are Aunt Pegg. After one week of looking after the children, you write a letter to their parents in which you: 1. Give your impressions of the children. 2. Give an account of your progress with them so far. 3. Tell your plans for the next week. Write your letter. Base it on what you have read in Passage A. ________________ October 6, 2011 Dear Dad/Mom of the kids I?ve been looking after you children for a week so today I write this letter just to let you know how we?ve been doing, and tell you the plans that we will do for the next week. From the very first time that you asked me to take care of the kids while you go on business, I?m extremely excited because I will have a chance to get to know them better. Do you remember that our dad was in the military? I was hoping that I could teach them to be good ?young soldiers? like my dad did to me and you. ...read more.

We did a bunch of housework, and I realized they?re all clumsy at housework, so I had to make them ?practice? by giving them chores to do everyday since. In order to put them into militaristic manner, I use whistle to make orders: breakfast, lunch, dinner, or just to call them. We have sugarless oat cereal for breakfast, the kind of breakfast that we always hoped for when we were kids. They don?t eat it. They hate it. I don?t let them dump the whole meal to the trash-can, they must not waste food like that, they are given extra chores to do if they keep whining without eating! On the second day, they seemed to miss you a lot. They don?t talk much anymore, they walk slowly, spiritless like little zombies. They behave better, they don?t insult each other, they?re quiet while doing their tasks, and I?m really pleased because of that. They?re uncommunicative as though they?re in jail. They got better anyways, but I?m not satisfied yet, they still need lots more training to do. On the third day of the progress, we did some educational lectures. ...read more.

Dad?s philosophy was especially connected to diet and health, I hated at first like the kids do right now, but they will soon realize it?s for their own benefit, I won?t tell, they have to realize it themselves. That was pretty much what we did on the first week. The kids were naughty and mischievous at the first few days, but they?re getting better. I can?t imagine how happy they will be when you?re back. Honestly, they really need more routines and discipline before the rot set in. I know my way of taking care of them is inconsistent, but that was exactly what dad did to the both of us so we can be who we are right now. As I planned, on next week, you will try and get them to the farm near your house so they can learn to do some farming. They could tidy the barn and the animals. I will still keep my theory of discipline and promptness. Besides, we could go to the river and study about some creatures around there? But chores are still going to be the ground rules, they will have to do chores with no excuses. I will make them get better and better everyday based on dad?s militaristic manner. Sincerely, Aunt Pegg ...read more.

The essay writer enters very imaginatively and effectively into the context of a stay in a farming community. She also makes a very convincing job of putting herself in the role of a strict Aunt who is determined to bring her nephews/nieces into line. The military references are most appropriate, as are the references to the father of herself and her sister (the intended recipient of the letter).

Sentence and paragraph construction is competent, though there are a few grammatical slips.