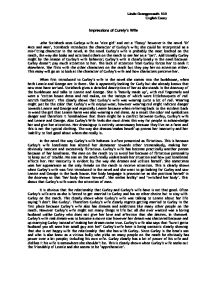 Impressions of Curely's Wife John Steinbeck sees Curleys wife as 'nice girl' and not a 'f****y' however in the novel 'Of Mice and Men', Steinbeck introduces the character of Curley's wife; she could be interpreted as a mis-fitting character in the novel. In the novel Curley's wife is probably the most loathed on the ranch, the way she looks and acts lead others on the ranch to see her as a 'tart'. Additionally Curley might be the reason of Curley's wife behavior; Curley's wife is clearly lonely in the novel because Curley doesn't pay much attention to her. The lack of attention from Curley forces her to seek it elsewhere. She flirts with the other characters on the ranch but they pay her no attention either. This essay will go on to look at the character of Curley's wife and how characters perceive her. When first introduced to Curley's wife in the novel she comes into the bunkhouse, when both Lennie and George are in there. She is apparently looking for Curly but she already knows that new men have arrived. Steinbeck gives a detailed description of her as she stands in the doorway of the bunkhouse and talks to Lennie and George. ...read more.

In the novel Curley's wife real dream was to become a movie star however her dream was shattered because end up marrying Curley instead of making her dream come true. Curley's wife also says that 'Sure I gotta husband you all seen him small guy aint he?' Curley's wife here is being sarcastic clearly showing that she is not happy with the relationship that she has with Curley. Since Curley is the boss's son and who is also know as a vicious bully who picks on many people on the ranch he obviously has power over a lot people; including his own wife. Curley clearly has a lot of power of his wife and dislikes it his wife is somewhere she shouldn't be. This is clearly shown when Curley's wife seeks out the friendship of Lennie and she seems to be 'apprehensive'. The attitude of other people on ranch to Curley's wife is undoubtedly that the men on the ranch try to avoid her because of flirtatious personality to keep out of trouble. This is because she is the only female on the ranch and half of the men rarely get a chance to see females and the ones they see are when they go into town to a 'w***e-house'. ...read more.

This is shown when she was having a conversation with Lennie in the barn, she says 'Coulda been in the movies and had nice clothes, coulda sat in them big hotels'. This shows that Curley's wife has dreamt for many years seeing herself as a potential film-star. She was tricked by a man at saying that she was a natural and that he put her into the movies. He said that he would write back however she never received that letter and her naivet� shows in her belief that her mother has stolen a letter (from her 'contact' in Hollywood) which was obviously never written; her immaturity appears in her instant reaction of marrying the loathsome Curley. Finally Curley's wife end up dead because Lennie's mistake, however when Curely's wife was found dead her appearance was not the same. By this I mean when the men found her dead Steinbeck describe her by saying 'and the meanness and the planning's and the discontent and the ache for attention were all gone from her face. She was very pretty and simple, and her face was sweet and young.' This means that underneath all the flirtatious and provocative personality she also has an innocent and sweet side of her. ?? ?? ?? ?? Linda Caengprasath 10S English Essay ...read more.

A good basic essay where points are often supported with evidence from the text and there is some analysis of language and structure. Make sure that story telling is avoided in analytical essays and the question remains the focus throughout the text.