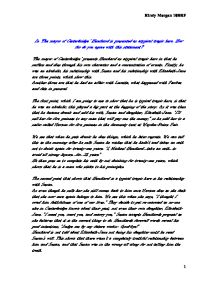 In &amp;#145;The mayor of Casterbridge&amp;#146; Henchard is presented as atypical tragic hero. How far do you agree with this statement?

In 'The mayor of Casterbridge' Henchard is presented as atypical tragic hero. How far do you agree with this statement? 'The mayor of Casterbridge' presents Henchard as atypical tragic hero in that he suffers and dies through his own character and a concentration of events. Firstly, he was an alcoholic; his relationship with Susan and his relationship with Elizabeth-Jane are three points, which show this. Another three are that he had an affair with Lucetta, what happened with Farfrae and fate in general. The first point, which I am going to use to show that he is typical tragic hero, is that he was an alcoholic, this played a big part at the begging of the story. As it was then that he became drunk and sold his wife, Susan and daughter, Elizabeth-Jane. "I'll sell her for five guineas to any man that will pay me the money," so he sold her to a sailor called Newson for five guineas in the furmenty tent at Weydon-Priors Fair. We see that when he gets drunk he does things, which he later regrets. ...read more.

He decides not to tell Elizabeth-Jane so she is kept under a mis-apprehension once again whilst Henchard knows the truth. This affects Henchard, as he is constantly worrying that she will find out and hate him for not telling her. He keeps the truth from her as he is lonely and is scared that if she knows the truth she will leave him. Another time that their relationship changes is when Henchard goes to commit suicide but sees his face in the water so does not. After this Elizabeth-Jane moves in with, and looks after him. Once again their relationship becomes stronger. Also because of this Henchard no longer feels lonely. My next point to prove that Henchard is a typical tragic hero is his friendship with Farfrae. There is often a cooling of friendship, as Henchard is nearly always jealous of Farfrae's success and popularity. A child says that Farfrae is 'cleverer than Mr.Henchard,' and that 'He's better tempered' and also that 'they wish that he was the mayor instead of Henchard.' Henchards friendship with Farfrae is a good example of his character. ...read more.

Firstly, when Farfrae first comes into the story and accepts the role as Henchard's manager, Henchard feels that fate has decided it. Another time is when he tells Elizabeth-Jane that he is her father and then later goes on to find out that he is not: "he could not help thinking that the concentation of eventsthis events that had produced was the scheme of some sinister intelligance bent on punishing him." From this we can see that he feels that fate is punishing him for what he did earlier that day. Another time that fate intervenes is when Henchard goes down to the river to kill himself. When he looks into the water he sees his own face. Even though it was only his model from the skimmity ride looking up at him it is too much of a coincidence that it was in that exact place at the same time that he looked into the water for it not to be fate. In conclusion the points that he is an alcoholic, his relationships with people and the intervening of fate help me to prove that the statement, In 'the mayor of casterbridge' Henchard is presented as a typical tragic hero is correct. ?? ?? ?? ?? Kirsty Morgan 10BRF 1 ...read more.