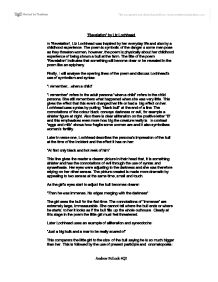 In Revelation, Liz Lochhead was inspired by her everyday life and also by a childhood experience. The poem is symbolic of the dangers some men pose as they threaten women,

"Revelation" by Liz Lochhead In 'Revelation', Liz Lochhead was inspired by her everyday life and also by a childhood experience. The poem is symbolic of the dangers some men pose as they threaten women, however, the poem is physically about her childhood experience of being shown a bull at the farm. The title of the poem "Revelation" indicates that something will become clear or be revealed in the poem like an epiphany. Firstly, I will analyse the opening lines of the poem and discuss Lochhead's use of symbolism and syntax: "I remember...when a child" "I remember" refers to the adult persona "when a child" refers to the child persona. She still remembers what happened when she was very little. This gives the effect that this event changed her life or had a big effect on her. Lochhead uses syntax by putting "black bull" at the end of a line. The connotations of the colour black conveys darkness or evil, for example a sinister figure at night. Also there is clear alliteration on the positive letter "B" and this emphasises even more how big the creature really is. In contrast "eggs and milk" shows how fragile some women are and it also symbolises women's fertility. ...read more.

At the beginning of verse two Lochhead uses the conjunction "And" to show that she is changing direction. The poet then goes on to use contrasts to highlight the poem's themes: "and in the yard, oblivious hens picked their way out" "And" is a turning point, telling us that something different is going to happen. "And" also indicates the persona changes. Additionally, "outside" shows the reader that there has been a change in scenery, which indicates that something different is going to happen. "Oblivious hens" is symbolism, referring to the woman being unaware, or none the wiser, of the dangerous "big bull" in the outhouse. This is basically saying that woman are oblivious of the danger that men can create and can put themselves into very dangerous situations, then don't know how to get out of them. "Picked" is being contrasted with the "trampling" and "clanking" in verse one. This gives us a soft image of woman and a hard image of men. Lochhead continues her contrast with: "The faint and rather festive tinkling" "Faint" is trying to tell us that the noise sounds muffled, and far away adding a sense of security for the hens. ...read more.

It shows her fear as she runs from the bull. She also uses personification and onomatopoeia in this line: "my pigtails thumping on my back in fear" Lochhead indicated the girl's heart is thumping because she is so scared and anxious. The alliteration on the letter "B" is again used in verse three, but this time it makes the link between the bull and the new threat to the young girl's safety, "big boys". This shows a link between the black bull in the first verse and the big boys in the third verse as they both have alliteration in the letter "B". The boys in this verse are destroying small, defenceless elements of nature around them. "who pulled the wings from butterflies and blew up frogs with straws". This indicates the boys indulge in reckless cruelty of nature, comparative of taking away women's freedom and identity. These actions mirror the destructive nature and aggressiveness of the bull. "Revelation" is thought provoking in that it challenges the reader to consider the relationship between the sexes and the impact that the male of our species can have over females. Lochhead does not allow her readers to be indifferent to her message, forcing them to consider her views. Agreement with her sentiments may not be total but readers will undoubtedly find themselves having to consider their own opinions. Andrew Pollock 4Q2 ...read more.