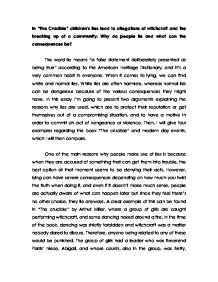 In The Crucible childrens lies lead to allegations of witchcraft and the breaking up of a community. Why do people lie and what can the consequences be?

In "The Crucible" children's lies lead to allegations of witchcraft and the breaking up of a community. Why do people lie and what can the consequences be? The word lie means "a false statement deliberately presented as being true" according to the American Heritage Dictionary, and it's a very common habit in everyone. When it comes to lying, we can find white and normal lies. White lies are often harmless, whereas normal lies can be dangerous because of the various consequences they might have. In this essay I'm going to present two arguments explaining the reasons why lies are used, which are to protect their reputation or get themselves out of a compromising situation, and to have a motive in order to commit an act of vengeance or violence. Then, I will give four examples regarding the book "The crucible" and modern day events, which I will then compare. One of the main reasons why people make use of lies is because when they are accused of something that can get them into trouble, the best option at that moment seems to be denying their acts. ...read more.

It started as rumors in websites, but people seemed to be very interested since they regarded the nation's leader. Clinton denied everything a million times as we can see in the following statement: "...I want to say one thing to the American people. I want you to listen to me. I'm going to say this again: I did not have sexual relations with that woman, Miss Lewinsky. I never told anybody to lie, not a single time; never. These allegations are false..." However, after further investigations, evidence such as recorded tapes and a dress of Lewinsky's stained with his semen were taken into consideration and it was concluded that President Clinton had indeed, had sexual relations with her. Overwhelmed by accusations and strong proof, Clinton finally admitted on August 17, 1998, to have had an inappropriate physical relationship with Monica Lewinsky. Even though Clinton's wife forgave him, many people had a new opinion of their president and lost some respect for him. ...read more.

A modern day example is the Big lie Bush invented against Iraq. He claimed Sadam Hussein had in his power weapons of mass destruction and would use them on America. However, this was not true and it was proved after thorough investigations. Bush made these accusations because he wanted to attack Iraq but he didn't have any good reason, so saying they were going against the USA made it almost mandatory to attack them back. These examples show us that when a person wants something, lies can sometimes help get it, like Abigail who tried to make a false accusation against Proctor's wife, whose place she wanted to take. The same happened with Bush, who wanted so bad to take revenge on Iraq, he invented a lie about Hussein. This clearly reveals a certain selfishness from both since they have no interest at all about anyone but themselves. In conclusion, we can say lies are all around us at all times and sometimes we need them but it is not right to use them. In the previous examples, this affirmation is confirmed, showing us the consequences lying can lead to. ...read more.