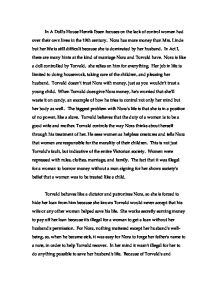 In A Doll's House Henrik Ibsen focuses on the lack of control women had over their own lives in the 19th century.

In A Doll's House Henrik Ibsen focuses on the lack of control women had over their own lives in the 19th century. Nora has more money than Mrs. Linde but her life is still difficult because she is dominated by her husband. In Act I, there are many hints at the kind of marriage Nora and Torvald have. Nora is like a doll controlled by Torvald, she relies on him for everything. Her job in life is limited to doing housework, taking care of the children, and pleasing her husband. Torvald doesn't trust Nora with money, just as you wouldn't trust a young child. When Torvald does give Nora money, he's worried that she'll waste it on candy, an example of how he tries to control not only her mind but her body as well . The biggest problem with Nora's life is that she is in a position of no power, like a slave. Torvald believes that the duty of a woman is to be a good wife and mother. Torvald controls the way Nora thinks about herself through his treatment of her. He sees women as helpless creatures and tells Nora that women are responsible for the morality of their children. ...read more.

After Torvald reveals his true self, she reconsiders her idea of freedom and wonders whether she was ever happy with Torvald. This revelation prompts Nora to walk out on Torvald. When the truth is exposed and Nora sees her marriage for what it is, the illusion is over. Nora is not a doll, but a human being with needs beyond the role of pretty, docile wife. Nora and Helmer are playing the roles that society has taught them. Torvald is an example of a stereotypical chauvinist, only interested in his appearance and the amount of control he can have over a woman. Nora, on the other hand, is a typical example of the meek woman who believes her role in life is to please her man. She is there to make Torvald think he is a much smarter, stronger, and better man than he actually is. In turn Torvald treats Nora like a little girl would treat a doll, a toy to play with. Yet, throughout the play Torvald calls Nora his "lark," "little wastrel," and his "pouty squirrel" , except when he's angry; then she becomes a woman. Nora's dance is a perfect image of her life spinning out of control. A Tarantella is a folk dance from southern Italy with a quick tempo. ...read more.

Almost every relationship similar to this ends with the "child" rebelling against the "parent", in an effort to exert their independence. Nora does the same, albeit late, she realizes that she is an adult, not a child, not a "heedless child", as Torvald calls her. Torvald's selfish reaction after learning of Nora's deception and forgery serves as the final impetus for Nora's awakening. Torvald's role in her misery allows her to leave him, yet she doesn't fully blame Torvald for her unhappiness. Nora realizes that staying with Torvald prevents her from being an individual. At the end of the play Nora has grown, no longer a doll, she leaves to learn how to be a woman. It is interesting that it took Nora leaving him for Torvald to finally comprehend that Nora is an actual person, with a mind of her own. He also seems to show some true feeling for her, amazingly enough, a real emotion for someone other than himself. It's possible to think that Torvald may begin to grow himself, to become a genuine human being able to truly love another person. I would like to believe that Nora finally becomes an independent, self-sufficient woman who has faith in herself, and a strong will. And that Torvald evolves into a caring, responsive man who will welcome a woman like the new Nora into his life. Nora has escaped her doll house at last. ...read more.