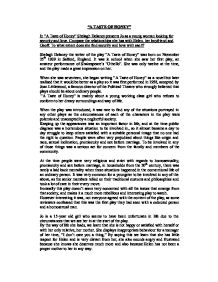 In &quot;A Taste of Honey&quot; Shelagh Delaney presents Jo as a young woman looking for security and love. Compare the relationships she has with Helen, her boyfriend and Geoff. To what extent does she find security and love with each?

"A TASTE OF HONEY" In "A Taste of Honey" Shelagh Delaney presents Jo as a young woman looking for security and love. Compare the relationships she has with Helen, her boyfriend and Geoff. To what extent does she find security and love with each? Shelagh Delaney the writer of the play "A Taste of Honey" was born on November 25th 1939 in Salford, England. It was in school when she saw her first play, an amateur performance of Shakespeare's "Othello". She was only twelve at the time, and the play made a great impression on her. When she was seventeen, she began writing "A Taste of Honey" as a novel but later realised that it would be better as a play so it was first performed in 1958, accepted by Joan Littlewood, a famous director of the Political Theatre who strongly believed that plays should be about ordinary people. "A Taste of Honey" is mainly about a young working class girl who refuses to conform to her dreary surroundings and way of life. When the play was introduced, it was rare to find any of the situations portrayed in any other plays as the circumstances of each of the characters in the play were polemic and unaccepted by a neglectful society. Keeping up the appearances was an important factor in life, and at the time public disgrace was a horrendous situation to be involved in., so it almost became a day to day struggle to keep others satisfied with a suitable personal image that no one had the right to question. People were often very prejudiced about things like origin and race, sexual inclination, promiscuity and sex before marriage. To be involved in any of those things was a serious act for concern from the family and members of the community. At the time people were very religious and strict with regards to homosexuality, promiscuity and sex before marriage, in households from the 20th century, there was rarely a laid back mentality when these situations happened in the conventional life of an ordinary person. ...read more.

At the start of the play, when we meet Helen and Jo, their relationship seems very weak, and doesn't seem to get any better as the play proceeds; because of this I can predict that as they don't dedicate sufficient time and effort to form stronger bonds they will not be able to progress and comprehend their individual needs and circumstances. "...Anyway, it's your life, ruin it your own way..." Helen makes this very strong remark that suggests a very careless thought with regards to Jo's future. She uses a common tactic that allows her to show a dignified attitude, by offering Jo sufficient freedom to ruin her future and hold her responsible for her actions, consequently saving herself from her daughter's blame and pain of failing. This shows how careless she is at offering support in Jo's plans ambitions and dreams. In a way this is a very sad thing to do, because not only does Jo lack financial stability, but also love and emotional security. On the other hand Jo is conscious of her mother's intentions with regards to a good life for her. "Ruining my life. After all, you've had plenty of practice" this blame on Helen's performance as mother is quite serious and is good at describing their relationship in general. This allegation is also good to prove the fact that Helen has offered no security or love to Jo. However making matters worse Helen accepts this accusation and unconsciously hurts Jo to a deeper extent saying "yes, give praise where praise is due, I always say..." pessimistically she responds with no hint of shame at what she has created in Jo, because of her neglectful behaviour. I don't think that during the play their relationship gets to evolve in a positive or a negative way; however Helen may start to look at Jo as a woman rather than a girl due to the consequence of her relationship with "boy" and her pregnancy. ...read more.

This maternal figure is very rare and distinctive in the play as he is the only in the play who offers this sort of care and guidance, despite him being a man. Geoff is nothing like Helen simply because they do not share any qualities or even defects. The only way in which he may resemble Helen's behaviour is at the end of his role, when he decides to leave Jo and not rebel against Helen's prejudices and power to throw him out of Jo's and the baby's life. just as Helen did, he ends up deserting Jo, and not thinking of the possible emotional crisis she may start to go through. At the end of the play Jo is left standing by herself lonely without anyone's help and support to hep undergo the conceiving of her baby, and the rest of her life she may still have to live. The mood is quite bleak, grim and dull at this point most of the relationships between the characters have broken up. Helen has been thrown out of Peter's house and longer is she able to enjoy financial stability or Peter's company as a husband. I believe none of the relationships in the play were really meant to work just as much as Geoff and Jo would have never been able to coexist considering their different circumstances. Shelagh Delaney may have chosen the title "A Taste of Honey" because in a way all of the characters in the play find a hint of happiness for a short while, and then just as it came it quickly diminishes and becomes difficult once again. I believe that Shelagh Delaney was correct in choosing this title for the play because it is indeed a sequence of events that resemble the ups and downs in life and the way one can taste something good but then it's taken away. It's never really a constant patch of happiness throughout, but a constant struggle to keep going as much as possible. ...read more.