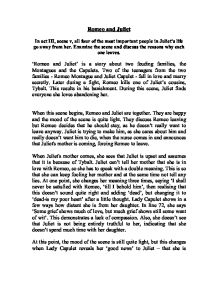 In act III, scene v, all four of the most important people in Juliet's life go away from her. Examine the scene and discuss the reasons why each one leaves.

Romeo and Juliet In act III, scene v, all four of the most important people in Juliet's life go away from her. Examine the scene and discuss the reasons why each one leaves. 'Romeo and Juliet' is a story about two feuding families, the Montagues and the Capulets. Two of the teenagers from the two families - Romeo Montague and Juliet Capulet - fall in love and marry secretly. Later during a fight, Romeo kills one of Juliet's cousins, Tybalt. This results in his banishment. During this scene, Juliet finds everyone she loves abandoning her. When this scene begins, Romeo and Juliet are together. They are happy and the mood of the scene is quite light. They discuss Romeo leaving but Romeo decides that he should stay, as he doesn't really want to leave anyway. Juliet is trying to make him, as she cares about him and really doesn't want him to die, when the nurse comes in and announces that Juliet's mother is coming, forcing Romeo to leave. When Juliet's mother comes, she sees that Juliet is upset and assumes that it is because of Tybalt. ...read more.

Juliet cannot marry Paris as she is already married to Romeo, and begs her mother to tell Capulet that she can't, saying 'I pray you tell my lord and father, Madam'. Juliet's mother is scared of Capulet, and shows her distance from her daughter by refusing to back her up, telling her to 'tell him yourself and see how he takes it at your hands'. At this point, she is already emotionally removed from Juliet, as she will not support her. At this point, Capulet and the nurse enter. Capulet thinks that Juliet will be delighted about the news that she is to be married to Paris. Lady Capulet breaks the news to him, adding that she wishes that Juliet were dead. Capulet is furious. He rants at Juliet although she tries to explain, he even says 'Wife, we scarce thought us blest that god has lent us but this only child, but now I see this one is one too much'. This is significant because, in Act 1 Scene 2, he says 'The earth hath swallowed all my hopes but she, she is the hopeful lady of my earth'. ...read more.

showing disbelief but she quickly recovers, saying (sarcastically) 'Well, thou has comforted me marvellous much'. Now all the people who were with Juliet have left, although for different reasons. Romeo left because he was forced to do so, having been banished. Capulet and Lady Capulet on the other hand left because they were not happy with Juliet refusing to marry Paris. The nurse's leaving is more complicated. She did encourage Juliet to marry Romeo and Juliet had expected her to back her up once Capulet and her mother had left, but she didn't. We don't know exactly why she changed her mind, whether she really thinks that Juliet should marry Paris and forget Romeo, whether she is trying to protect Juliet, thinking that it would be kindest or whether she is just fickle. This scene is arguably one of the most significant - though not necessarily the most dramatic - of the whole play. In it we see early evidence of the rapid disintegration of Juliet's life that quickly follows. It can be said to symbolise (and prophesise) the tragic end and lonely conclusion to both Juliet's life and the play. ...read more.