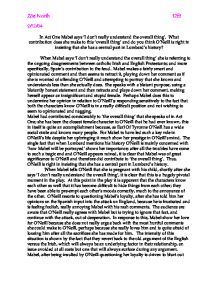 In Act One Mabel says 'I don't really understand the overall thing'. What contribution does she make to this 'overall thing' and do you think O'Neill is right in insisting that she has a central part in Lombard's history?

9/12/04 In Act One Mabel says 'I don't really understand the overall thing'. What contribution does she make to this 'overall thing' and do you think O'Neill is right in insisting that she has a central part in Lombard's history? When Mabel says 'I don't really understand the overall thing' she is referring to the ongoing disagreements between catholic Irish and English Protestants; and more specifically, Spain's contribution to the feud. Mabel makes a fairly smart and opinionated comment and then seems to retract it, playing down her comment as if she is worried of offending O'Neill and attempting to portray that she knows and understands less than she actually does. She speaks with a blatant purpose, using a blatantly honest statement and then retracts and plays down her comment, making herself appear an insignificant and stupid female. Perhaps Mabel does this to undermine her opinion in relation to O'Neill's; responding sensitively to the fact that both the characters know O'Neill is in a really difficult position and not wishing to seem to opinionated and nagging. Mabel had contributed considerably to 'the overall thing' that she speaks of in Act One; she has been the closest female character to O'Neill that he ...read more.

The pregnancy shows Mabel's importance because despite the fact that O'Neill has mistresses which he keeps in the same house as Mabel, he really does love her. The mistresses are evidently a factor of O'Neill's culture, differing from Mabel's upbringing; this is perhaps why Mabel arouses the matter during this significant argument, as a display of the fact that she is English and he is not. Socially it is seen as quite corrupt to have a mistress, especially more than one living under the same roof as your wife, but, in context, the mistresses are there simply to satisfy a physical and sexual need of O'Neill. Conversely, Mabel plays a more key role, she is O'Neill's emotional support throughout the play, and from start to finish O'Neill demonstrates his love for Mabel. Taking the single fact that Mabel is pregnant it does not appear that O'Neill has stopped physically loving her and so, it is true to say that Mabel plays an actively role in many aspects of O'Neill's life. Throughout the opening of the play O'Neill is mainly concerned with Mabel and changing his house to incorporate her and make her feel comfortable and welcome. ...read more.

It is only her sister Mary who maintains brief contact with Mabel after she has joined O'Neill. Because of this, Mabel really has to make her relationship with O'Neill work; she really has no-one but him and has made so many sacrifices for him. O'Neill does show some commitment to Mabel when they get married by getting the protestant bishop Tom Jones to marry them, much to the horror of O'Neill close friends Lombard and Harry. When he declares that he is married, the pair of them speculate in a joking manner about who is his new wife is, illustrating the point that previously O'Neill has been open about his sexual conquests but neither Lombard or Harry know anything of Mabel, probably because Mabel is truly more important. Throughout the play Mabel appears to be one of the closest people to O'Neill and therefore, deserves to be portrayed correctly and with much credit in Lombard's history. The sacrifices she made for O'Neill as such a young woman to someone much older than herself alone make her significant. Mabel remains as support to O'Neill throughout much of the play and is clearly incredibly important to him, and therefore, deserves fully to be in the book. Z�e North 12fii ...read more.