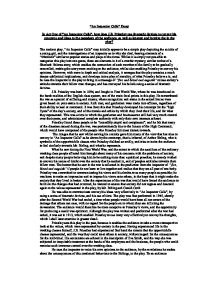 In Act One of &quot;An Inspector Calls&quot;, how does J.B. Priestley use dramatic devices to convey his concerns and ideas to the members of the audience, as well as interest and involve the in the play?

"An Inspector Calls" Essay In Act One of "An Inspector Calls", how does J.B. Priestley use dramatic devices to convey his concerns and ideas to the members of the audience, as well as interest and involve the in the play? The modern play, "An Inspector Calls" may initially appear to be a simple play depicting the suicide of a young girl, and the interrogations of an inspector as to why she died, bearing elements of a "whodunit" similar to popular stories and plays of the times. Whilst it is simply not possible to categorise this play into one genre, there are elements in it of a murder mystery, similar to that of a Sherlock Holmes story, which enables the connection of each member of the family to be gradually unravelled, making the story more exciting to the audience, whilst also enabling Priestley to convey his opinions. However, with more in depth and critical analysis, it emerges that the play contains a much deeper subliminal implications, and develops into a play of morality, of what Priestley believes in, and he uses the Inspector in the play to bring in a message of "fire and blood and anguish" unless society's attitude towards their fellow man changes, and has conveyed his beliefs using a series of dramatic devices. J.B. Priestley was born in 1894, and fought in First World War, where he was introduced to the harsh realities of the English class system, one of the main focal points in this play. He remembered the war as a period of suffering and misery, where recognition and status in the armed forces were given based on your status in society. Rich men, and gentlemen were made into officers, regardless of their ability to lead or command. It was from this that Priestley developed his contempt for the "high flyers" of the day's society, and of the morals and ethics by which they lived their life, and for what they represented. ...read more.

For example, had they just heard of the suicide, would the revelations of each member's involvement with Eva Smith have emerged, without the presence of the inspector? The answer is almost certainly not. Without the inspector, following the unities, as described above, would have made it impossible for the revelations to come about, and Priestley could not have conveyed his message. The inspector is used, to some extent, as a catalyst, in order to make the play progress and develop, thus allowing Priestley to convey his ideas. He has seemingly omniscient powers; he draws out the truth from each family member, with seemingly little provocation. It is these powers bestowed upon this character by Priestley, which enables the inspector to convey to the characters, the message that Priestley wants to communicate to his audience. The effect that the inspector has on each character is symbolic of the morals that the "old generation" lived by, the ones that Priestley did not want society to degenerate to again, and the ones that are represented by the post war generation, the need to build on what they had learnt, from the two world wars. When the inspector has only just arrived, we are given a very good indication already of the sort of morals that the different generations of the family represent. When told of the suicide of the young girl, before her name is disclosed, the reactions of the representatives of each generation are very conflicting. Eric's immediate reaction is an involuntary outburst of, "My God!" a contradiction to Mr Birling's impatient "Yes, yes. Horrid business." which immediately conveys the difference in attitude of the generations. Another example of this is how the inspector makes Mr. Birling angry, but not remorseful. He still lives by the morals of the "old-generation" of society, and does not intend to change his views despite everything that is revealed. Priestley uses this to highlight the exact way of life and the exact morals lived by that he does not want people to revert back to. ...read more.

does not distract them with other extraneous factors, and this use of an unchanging setting requires him to use strategic entrances and exits of different characters, enabling the play to develop and reach new levels, a technique that increases the audience's enjoyment and involvement. He uses the inspector to develop the play; he can almost be described as a catalyst for the events. He is also able to affect the characters in ways that provoke a response, symbolic of what the characters represent, and it is because of this that the introduction of the inspector is effective in conveying the ideas of Priestley, whilst maintaining a flow of plot that the audience can become engaged in the story. I feel that the most effective device that Priestley uses in the play is irony, particularly that dramatic irony. In doing this he makes the audience lose respect for the people in the play who represent the values that Priestley wishes to condemn, he makes the audience feel that everything that these people say or do, is wrong, including the values that they live their life by. This convinces the audience to share the same opinion as Priestley, therefore conveying his worries effectively. The retrospective irony complements the dramatic irony, because, in effect, it balances out the playwright's own inferences, with something that will captivate the audience. I feel that this play would still be relevant in today's society, despite extensive improvements in people's attitudes towards the greater community, there are still a great many extensive improvements still to be made, and everyone could benefit from doing so. Priestley has made clear the society that he does not want people to revert to, so that they can build on a better society in the future, where people look after everybody else, and realise that they are all part of one body, and that their actions can have consequences that stretch far beyond anything that they could comprehend; that other's lives are inextricably tangled within our own. ...read more.