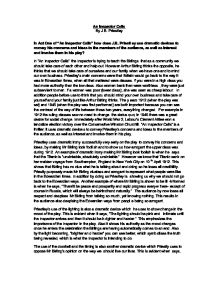 In Act One of An Inspector Calls how does J.B. Priestley use dramatic devices to convey his concerns and ideas to the members of the audience, as well as interest and involve them in his play?

An Inspector Calls By J.B. Priestley In Act One of "An Inspector Calls" how does J.B. Priestley use dramatic devices to convey his concerns and ideas to the members of the audience, as well as interest and involve them in his play? In "An Inspector Calls" the Inspector is trying to teach the Birlings that as a community we should take care of each other and help out. However Arthur Birling thinks the opposite, he thinks that we should take care of ourselves and our family when we have one and to mind our own business. Priestley's main concerns were that Britain would go back to the way it was in Edwardian times, when all that mattered were classes. If you were in a high class you had more authority than the low class. Also women back then were worthless, they were just subservient to men. If a women was poor (lower class), she was seen as cheap labour. In addition people before use to think that you should mind your own business and take care of yourself and your family just like Arthur Birling thinks. The years 1912 (when the play was set) and 1945 (when the play was first performed) are both important because you can see the contrast of the way of life between those two years, everything changed. ...read more.

This emphasizes the importance of the Inspector in the play. Also it shows his authority as the mood changes once he enters the celebration the Birlings are having automatically comes to an end. Also by the light becoming, "brighter and harder" you can see better, which symbolises the truth being revealed, which is what the Inspector is intending to do. The use of the doorbell and the timing is also another dramatic device which Priestly uses to oppose Mr Birling's opinion on the way we should live our lives. This is evident when says, "That a man has to mind his own business and look after himself and his own - and-", he then is interrupted, "We hear the sharp ring of a front doorbell. Birling stops to listen." Priestley purposely got the Inspector to interrupt as the Inspector represents Priestly himself and his views, so he obviously disagrees with what Mr Birling is saying. Mr Birling's statement was what they would think like in the Edwardian times, which is what Priestley is concerned about. Priestley thinks the opposite of what Mr Birling thinks as he thinks we should help the community, so by interrupting Mr Birling Priestley is trying to tell the audience that it is wrong to think like that and that we should not go back to the Edwardian ways. ...read more.

After the Inspector states that Eva Smith changed her name to Daisy Renton Gerald immediately recognized the name, this adds onto the suspense as the reader now knows that Gerald also was to blame for Eva Smith's death. Soon after Act 1 ends with the Inspector, "Well Gerald?" This is effective because the reader starts to understand that the Inspector has everything under control. It also shows that the Inspector already knew everything before he even had entered the house. This suggests to us that Priestley is not just going there to find out who done what, he is trying to teach us something from this. In conclusion as the story went along you get a different opinion based on the Birlings; at the start the Birling seemed like a normal happy family just celebrating the engagement. However as you read through Act 1 you start to understand that the Birlings are heartless and each time the Inspector reveals the truth more and more you detest them even more each time. Priestley uses many methods as I have stated, for example the significance of the lighting and the doorbell timing etc... I think that the playwright's message is that we do not go back to the old Edwardian ways. I also think this is relevant today as everyone should have equal rights and they should not be downgraded if they are poor (lower class back then) or a different religion or colour. ...read more.