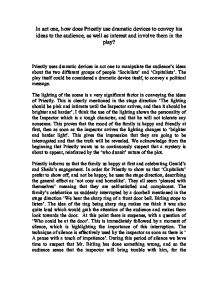 In act one, how does Priestly use dramatic devices to convey his ideas to the audience, as well as interest and involve them in the play? Priestly uses dramatic devices in act one to manipulate the audience's ideas about the two different groups of people 'Socialists' and 'Capitalists'. The play itself could be considered a dramatic device itself, to convey a political message. The lighting of the scene is a very significant factor in conveying the ideas of Priestly. This is clearly mentioned in the stage direction 'The lighting should be pink and intimate until the Inspector arrives, and then it should be brighter and harder'. I think the use of the lighting shows the personality of the Inspector which is a tough character, and that he will not tolerate any nonsense. This proves that the mood of the family is happy and friendly at first, then as soon as the inspector arrives the lighting changes to 'brighter and harder light'. ...read more.

At this point there is suspense, with a question of 'Who could be at the door'. This is immediately followed by a moment of silence, which is highlighting the importance of this interruption. The technique of silence is effectively used by the inspector as soon as there is ' A pause with a touch of impatience'. During this period of silence we have time to suspect that Mr. Birling has done something wrong, and so the audience sense that the inspector will bring trouble with him, for the Birlings. When the inspector arrives Mr.Birling is quite friendly and tells the inspector to sit down. When the inspector then states that he is enquiring about Eva Smith, Mr. Birling starts to get quite restless. Priestly presents Mr.Birling as a fool using dramatic irony (Dramatic irony is when the audience know more information than the characters themselves). This is evident when Priestly confidently says that the Titanic is 'unsinkable and absolutely unsinkable' and that there isn't going to be World War and it will never happen. ...read more.