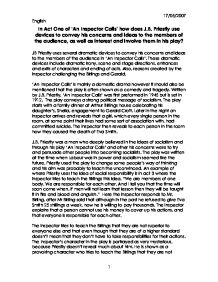 In Act One of 'An Inspector Calls' how does J.B. Priestly use devices to convey his concerns and ideas to the members of the audience, as well as interest and involve them in his play?

In Act One of 'An Inspector Calls' how does J.B. Priestly use devices to convey his concerns and ideas to the members of the audience, as well as interest and involve them in his play? JB Priestly uses several dramatic devices to convey his concerns and ideas to the members of the audience in 'An Inspector Calls'. These dramatic devices include dramatic irony, scene and stage directions, entrances and exits of characters and ending of acts. Also, reasons created by the inspector challenging the Birlings and Gerald. 'An Inspector Calls' is mainly a domestic drama however it should also be mentioned that the play is often shown as a comedy and tragedy. Written by J.B. Priestly, 'An Inspector Calls' was first preformed in 1945 but is set in 1912. The play conveys a strong political message of socialism. The play starts with a family dinner at Arthur Birlings house celebrating his daughter's, Sheila, engagement to Gerald Croft. Later in the night an inspector arrives and reveals that a girl, which every single person in the room, at some point their lives had some sort of association with, had committed suicide. The inspector then reveals to each person in the room how they caused the death of Eva Smith. J.B. Priestly was a man who deeply believed in the ideas of socialism and through his play 'An Inspector Calls' and other his concerns were to try and persuade other people into becoming socialists. ...read more.

Priestly uses many dramatic devices to influence the audience; dramatic irony is one of them. Dramatic irony is where a character has limited knowledge of something in contrast to the audience which understands the subject greatly. Dramatic irony is used early in the play to illustrate Birlings arrogance and ignorance. When Birling comments on why the Titanic will succeed and how their will be no more wars, the audience obviously knows that although it's a very convincing speech, it's is all untrue. Birling is shown as arrogant and ignorant, but Priestly also reflects some fear that Birling might lose his wealth in case of war and therefore it denies war very strongly. Should a war start many of Birlings labour force will go and fight and England can suffer great economical damage. Birling is afraid to admit that, this could happen and therefore denies any chance of war with such confidence. Birling also uses proleptic irony throughout act one. Proleptic irony is the use of a phrase which is seemingly innocent but gains significance later. Examples of this in act one is first, when Birling says to Eric 'and one day, I hope, when you have a daughter of your own, you'll understand why'. Later in the play we find out that Eric got Eva Smith pregnant and therefore could have had a daughter. Another example is where Birling talks to Gerald about Eric, 'you don't know what some of these boys get up to nowadays'. ...read more.

Was it an accident?" The inspector brings out a different side of Sheila, one which wasn't seen before; she is seen as a vulnerable girl, who is sympathetic to everyone. Before the inspector arrives she is seen as a rich snob, who thinks that she is superior to lower class people. Throughout Act One Priestley manipulates the audience; he does this in different methods. The inspector announces that a young girl had just died, "Two hours ago a young woman died in the Infirmary. She'd been taken there this afternoon because she'd swallowed a lot of strong disinfectant. Burnt her inside out, of course." Priestly uses this method to get the audience to commiserate with the death of that young woman. Another method that Priestly uses to get the audience involved is with dramatic irony. When the Birling family is first introduced they are seen as a happy, respectable, wealthy family. However, this all changes when the inspector enters, the image of a respectable family that the Birlings were seen to be begin to fade away. Priestly also uses progressive revelations and climax to interest the audience and make them wonder what connection did each character have with Eva Smith. The overall message of 'An Inspector Calls' is social responsibility. The play teaches us that no matter how important and respectable a people see themselves as, they are still responsible for and face the consequences of their own actions. This is still relevant nowadays as people still act this way, and do not take responsibility for their own actions. ?? ?? ?? ?? 17/05/2007 English 1 ...read more.