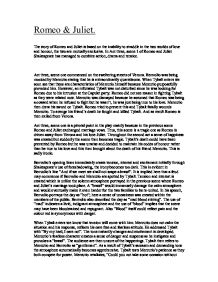 In Act three, scene 1 of Romeo and Juliet Shakespeare has managed to combine action, drama and tension.

Romeo & Juliet. The story of Romeo and Juliet is based on the inability to straddle in the two worlds of love and honour, the two are mutually exclusive. In Act three, scene 1 of Romeo and Juliet Shakespeare has managed to combine action, drama and tension. Act three, scene one commenced on the sweltering streets of Verona. Benvolio was being mocked by Mercutio stating that he is extraordinarily quarrelsome. When Tybalt enters we soon see that these are characteristics of Mercutio himself because Mercutio purposefully provoked him. However, an infuriated Tybalt was not disturbed since he was looking for Romeo due to his intrusion at the Capulet party. Romeo did not see reason in fighting Tybalt as they were related now. Mercutio was dismayed because he assumed that Romeo was being a coward when he refused to fight but he wasn't, he was just being true to his love. Mercutio then drew his sword on Tybalt. Romeo tried to prevent this and Tybalt fatally wounds Mercutio. To avenge his friend's death he fought and killed Tybalt. And as result Romeo is then exiled from Verona. Act three, scene one is a pivotal point in the play mainly because in the previous scene Romeo and Juliet exchanged marriage vows. ...read more.

Romeo's emotions are evident when he says, "Be satisfied". His refusal expresses suspense and produces a catalyst to the situation and finalises that he shall not be convinced in to fighting. Mercutio is portrayed as the comedian and knowledgeable with his language, this is shown when he turns Tybalt's insults into humour such as, "here's my fiddlestick; here's that shall make you dance" when Tybalt refers him to a musician which were in lower status at that time period. When Mercutio is injured in the fight the audience and other characters are unsure of how seriously Mercutio is hurt. At first Mercutio states, "I am hurt" this proves he is defiantly hurt, but there is a question about the severity at this point and his tone was more neutral, which keeps the audience guessing but then he goes on to issue the curse, "A plague a' both houses." At this point his tone has suddenly gone very angry and serious; he is cursing the Capulets and Montague. When Mercutio ultimately says "I am sped" a lot of tension is created because he indirectly states this may be the end of his life and that he has come to an end. ...read more.

In the Elizabethan times this was a massive issue, a man's pride and honor is not so huge and when a man's reputation is damaged he wouldn't be as dramatic as they would have been in the Elizabethan era. Romeo also felt it was his duty to now punish, Tybalt whereas is the modern days duty is not important at all. Romeo's status as a Montigue was at stake because a Capulet had just defeated a Montigue if the same situation was to occur today, a man would not be provoked to fight or kill someone because of his status because it is not as important as it was before. I have come to the conclusion that Act Three, scene one is extremely exciting and tense and is very dramatic. The scene leaves me feeling, curious about how Romeo and Juliet are going to continue their marriage now that Romeo has been banished from Verona. It is central point in the play, and decides the fates of most the characters and it leads directly to the final tragedy. It's amazing to see such a beautiful love that has so many troubles which almost seem impossible to overcome, but can true love withstand obstacles? ...read more.